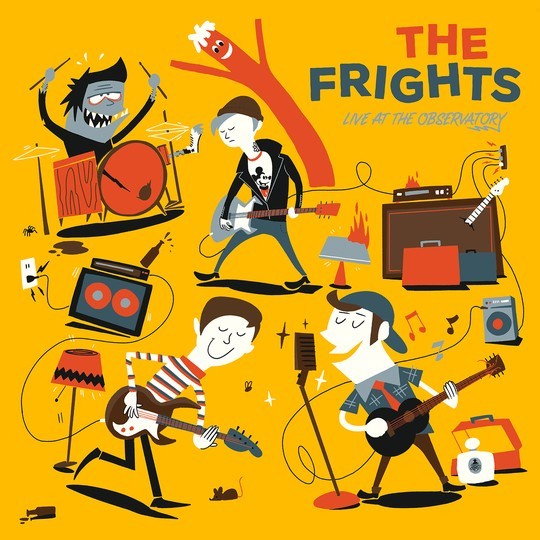 Live at The Observatory

‘Live At The Observatory’ is a document of The Frights’ sold out show at the infamous Californian venue; the gig signifies the kick off of the band’s headline tour for third LP ‘Hypochondriac’. Across 14 songs, The Cali band charge through their complete catalogue, touching on the group’s self-titled LP, ‘You Are Going To Hate This’ The Frights’ sophomore album, as well as cherry-picking a selection of tunes off their latest offering. “The Frights capture all the dizzy chaos of their live set, an experience that’s equal parts a wildly unsupervised kid’s birthday party and an off-the-rails group-therapy session.” Very true, person who wrote the press release for ‘Live At The Observatory’! There’s elation in the crowd that borders on hysteria; all the hallmarks of The Frights’ adoring fans are captured via bellowed singalongs and Beatlemania-esque screams. The tone is set by the mass of voices heard on opening track ‘Kids’, where the audience take over lead vocal duties midway through the song. When it comes to catharsis, this is felt as the band race through their heart-in-your-sleeve styled pop-punk-cum-surf-rock. Tracks like ‘Whatever’ and ‘Over It’ raise the roof, while ‘Hold Me Down’ and ‘Alone’ convey the four piece’s vulnerable side via Mikey Carnevale’s emotive tones; It’s evident the group’s faithful hang on his every, bruised and tender word.

Much like ‘Hypochondriac’ itself, the band’s slightly twee pop-punk wears thin over 14 songs, with Carnevale’s overwrought vocals veering a little too close to whiney. Equally, towards the end of the set, the in-between song chatter comes across as awkward and a little forced.

Live albums are funny things, there’s the likes of The Who’s ‘Live At Leeds’ heralded as the best live record of all time and has the power to seduce music fans that aren’t necessarily into the legendary rock ‘n’ roll act. And then there’s more niche live LPs like ‘Live At The Observatory’ which for the most part won’t snare in any new fans, but it’ll be special to those that love The Frights. You can’t ask for any more than that right?