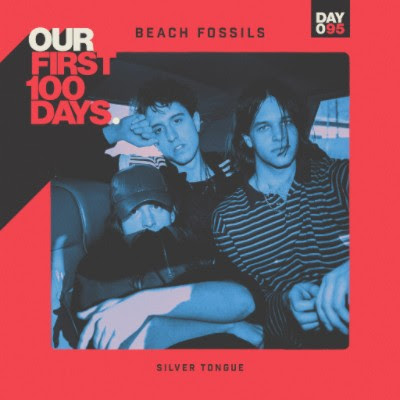 Prior to Beach Fossils release of their new full-length, Somersault, the band are contributing a non-album track, “Silver Tongue,” for Secretly Group’s Our First 100 Days, which aims to raise funds and awareness for organizations supporting causes that are under threat by the proposed policies of a Trump administration. Beach Fossils’ Somersault, out? June 2nd via Bayonet Records.

Our First 100 Days is releasing 100 previously unreleased songs via Bandcamp throughout Trump’s first 100 days in office. Sold in subscription format for a minimum contribution of $30, fans will receive one song per day across the first 100 days of Trump’s presidency. Powered by RPM, all profits from Our First 100 Days will benefit organizations that stand in opposition to a Trump presidency; All Above All, Cosecha, Hoosier Action, People’s Climate Movement, and Southerners On New Ground.

Beach Fossils recently shared the video for Somersault single “Saint Ivy” which pays homage to New York City artists and offers a reassuring look into the diversity of this country. Similar to Our First 100 Days, fans and viewers were encouraged to make donations to the organizations: National Endowment for the Arts and Center for Arts Education NYC (both falling victim in recent times to our current administrations’ budget cuts).