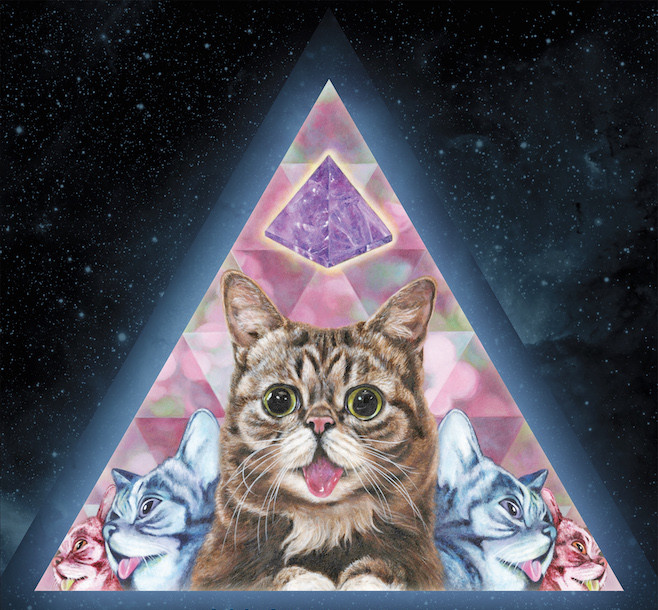 Lil BUB has had her paws in the music world for quite some time now — she’s tight with Steve Albini, collaborated musically with Andrew W.K., produced a single for Kelley Deal, has a song written for her by Kimya Dawson and Aesop Rock, famously appears on Run the Jewels’ Meow the Jewels, has worked closely with David Yow, spearheaded 50 Bands and a Cat, has been held by Jonathan Richman, enjoyed Thanksgiving dinner with Murder by Death and more. Now, BUB has announced her own debut album, Science & Magic, to be released December 4th on Joyful Noise Recordings.

The very first full-length concept album written by a magical space cat, Science & Magic is currently available for pre-order, with 500 VIP copies that feature BUB’s face, plus special artwork and a signature from BUB herself! 25% of net profits from the sale of the album will be donated to Lil BUB’s Big FUND for the ASPCA to benefit special needs pets.

For an early preview of the album, you can watch a trailer video that features behind-the-scenes footage of BUB in the studio along with clips of some Science & Magic tracks.

Science & Magic is best summed up by longtime Lil BUB friend & fan Andrew W.K.:
What you hold in your hands is the first ever collection of songs officially made by Lil BUB. That’s right. This is music made by a magical space cat. How is that possible? Allow me to explain…

First of all, it should be understood that this album is a genuine musical experience. Also, it should be understood that this is not a novelty item or a cheap and disillusioning gimmick. This is a bonafide and musically gratifying concept album, which entirely emerged from the soul and spirit of Lil BUB herself. How do I know this? Because BUB told me so.

My name is Andrew W.K. and I have had the privilege of working with BUB and making music with BUB and even holding BUB in my arms. Not only is she the softest creature I have ever encountered, she is also the most musically and compassionately gifted. The songs on this album are her vision. They are by her, about her, and are her. Listening to these songs is the sonic equivalent to holding Lil BUB in your own arms.

It may seem impossible that a cat could compose an entire album of carefully crafted instrumental music, but BUB is not simply “a cat”. She came from the deep unknown, on an intergalactic mission to help the people and animals of earth with her magic, talents, and otherworldly wisdom. I can attest to her power – the time I spent with her absolutely made me a better person.

The songs on this album are the soundtrack to BUB’s universal adventure, and a soundtrack to the universe itself. You’ll feel transported by the music’s stimulating spirit, and taken to places beyond your imagination’s limits, all the while experiencing the sonic aura of BUB’s loving and compassionate presence.

BUB is more than just a “muse”; she wrote this music and used the musicians on this album (BUB’s dude, Mike, and his close friend Matt, who is also the official bubbysitter), as her creative vessels to get the music from inside of her spirit and into your mind. If it weren’t for BUB, this music would not exist.