“Life In Hell” by The Woolen Men 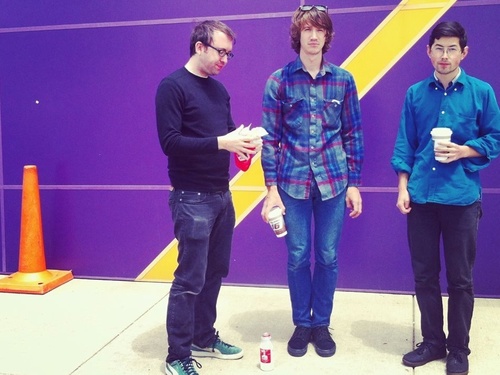 The Woolen Men are three – two Oregon natives and a Washingtonian. They play punk influenced DIY music in the Pac-NW tradition of Dead Moon and the Wipers.

Today the band released the second track “Life In Hell” off their sophomore album Temporary Monument on Woodsist Records, due September 4th. Stream the album’s second single ” Life In Hell” over at SPIN Magazine. Today they also announced a West Coast tour with Landlines.

The Woolen Men are Alex Geddes, Lawton Browning and Raf Spielman. They live and work in Portland, OR. Raf previously released an album of solo material under his Polyps moniker for Woodsist’s sister label Hello Sunshine.

“Our hometown has been buried under an avalanche of condos and pointless businesses catering to the newly rich. Noise complaints shut down our shows and pull the plug on countless DIY venues. The places where we lived are being torn down; the rent keeps climbing up. Born too soon or too late, the recession’s effect on our youth was as invisible as it it was profound.

Music today is rendered powerless – white noise made in the echo chamber, for the great Smooth Face that gazes once and moves on. So here it comes, some noise from the dustbin. The internet is sham: Temporary Monument, we made it for ourselves. Look us in the eyes and tell us you’re not getting old.”

**All Shows with Landlines