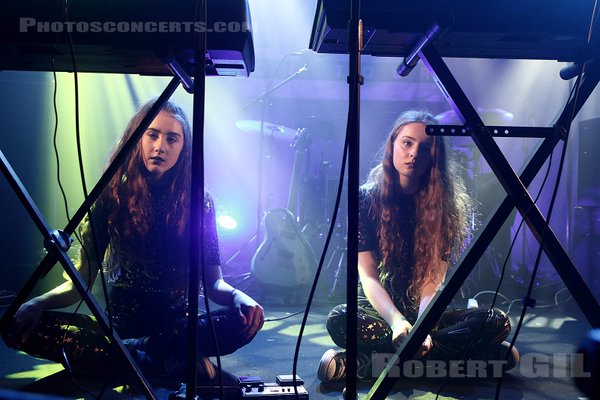 Let’s Eat Grandma will release their debut album I, Gemini next month. Today the band shares their video for their new single, “Eat Shiitake Mushrooms.” The track, an organ, synth and glockenspiel bass-music-pop-banger complete with rap breakdown, offers an insight into the duo’s weird and mysterious world. Shot in Wrongs Covert, an ancient woodland site in their hometown of Norwich, the video for Eat Shiitake Mushrooms is premiering via Dazed, here.

I, Gemini, the debut album from Rosa Walton and Jenny Hollingworth, A.K.A. Let’s Eat Grandma will be released on 17th June 2016 via Transgressive. The album was recorded in the former nuclear bunker turned analog paradise, Old School Studios in Norwich, under the watchful eye of Will Twynham (Hand Of Glory Records).

As thick as thieves, as sharp as knives, as like-minded as twins, wildly imaginative multi-instrumentalists and talented putative pop stars Rosa and Jenny, both 17, met aged four in their local infant school in Norwich and have been inseparable ever since.

Let’s Eat Grandma was formed in 2013 when Rosa was given a second hand acoustic guitar for her birthday and Jenny adopted a battered old ukulele. Influenced by playing jazz and classical music both in and out of school and their own desire to explode the pop formula, they started writing a series of uniquely structured compositions. On a month by month basis their repertoire of instruments expanded and expanded to include the saxophone, the piano, mandolin, drums, synthesizers, harmonica, recorders and whistles, even if their audience initially was only each other.

‘Deep Six Textbook’ – their debut single which has already caused a stir on the internet, refers to the old maritime phrase meaning to throw something overboard and sets out LEG’s desire to throw the rulebook away. By their own standards the song is both lush and sepulchral and is intended to be the “calm before the storm” as the opening track. Chocolate Sludge Cake’ and ‘Chimpanzees InCanopies’ both relish in thrusting together seemingly incompatible genres such as R&B with cosmic synth psych; and stark minimalism with freak folk. They reclaim children’s fairy tales back from vacuous “Disneyfication” on ‘Rapunzel’, re-injecting the story with a dark sense of gothic unease. And ‘Sax In The City’ is a dystopian nightmare of people rendered robot slaves by smartphones and tablets.

The name Let’s Eat Grandma was chosen in a rush the night before their first ever gig, from an old grammatical joke which highlights the usefulness of a well placed comma. The name is ideal for a band that can sound quite sweet and poppy on first listen but who also have deeper, darker undercurrents.

8. Welcome to the Treehouse Part I

9. Welcome to the Treehouse Part II