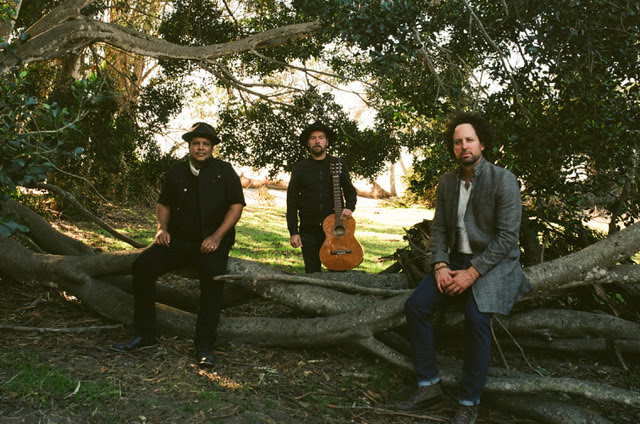 On the outskirts of San Antonio, Texas lies Leon Creek: a small river that served as the first rest stop and watering hole for travelers, cargo, mail and stagecoaches making their way from Texas to Southern California in the 1850’s and 60’s. As Americana and country music moved west and absorbed the influences from the cultures and history, along the way it helped shape what we know today…

Leon Creek, is a new project from Los Angeles-based singer/songwriter Chris Pierce, Matthew Stevens, and producer Erik Janson, a variety of influences converge to bring forth a new take on the traditional Americana/roots sound.

For Leon Creek, Pierce’s vocal and blues harmonica prowess are showcased in a new light, combining with the finger picking, bluegrass melodies of Matthew Stevens, who has previously recorded World and Cumbia inspired tracks with the likes of Ozomatli’s Asdru Sierra and rapper Thurz, resting perfectly on the vibrant and maximalist production talents of Erik Janson (of Wildling & Left Field Messiah fame).

This band of brothers have come together to reflect the broadening horizons of contemporary Americana/Country, Blues and Roots music, drawing from the influences from which the genres originated, while embracing eclectic and unexpected inspiration as well. Their debut single “Call it a Day” from the full-length album Far From Broken is due out now.

Chris Pierce on “Shakes The Ground:”

“Shakes The Ground” is a song about how a strong bond can have its ups and downs. It’s about how showing love can create massive energy and shake the foundation of what that love and respect was built on, being the force for good that brings us together. Musically this song was inspired by repeat listens of R.L. Burnside’s album Come On In as well as some of the textural and hypnotic sounds of The Brian Jonestown Massacre we were listening to. When we started recording Chris’s vocals and put his harmonica through a guitar amp with effects pedals on, we discovered a gritty and driving blues world for the album.