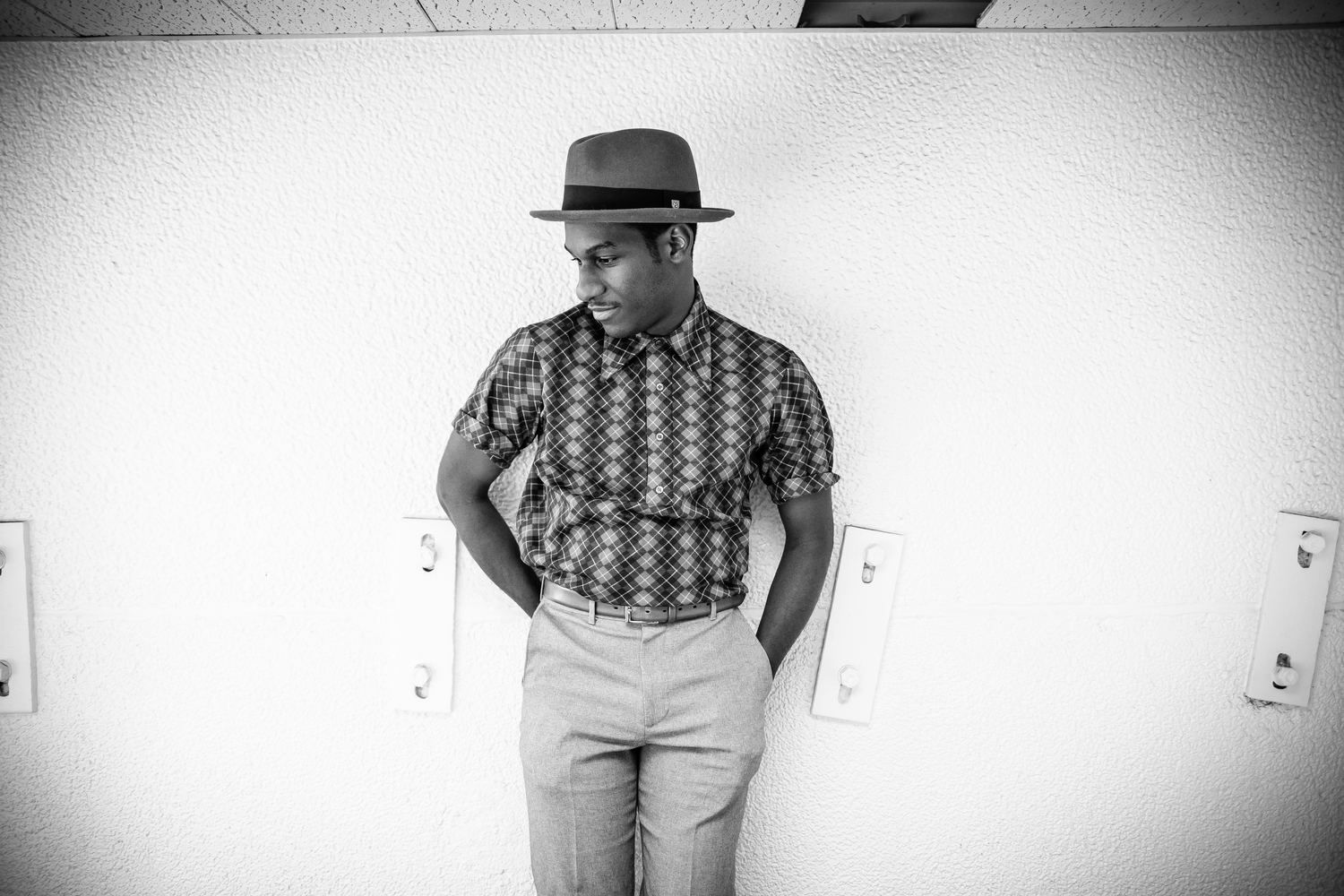 Leon Bridges is a story unto itself, the kind that you love to hear when discussing a musician’s success. Bridges is a star in an almost classic sense. The kid bussing tables at a restaurant who just-so-happens to bump into another musician who ends up helping him make the record that propels him to stardom. There’s a movie there.

Bridges was that very guy, working on his music, struggling to make ends meet, when he ended up connecting with Austin Jenkins of White Denim. After recording with him in his studio, Bridges eventually had a backing band behind him, and a hit single in his pocket. “Coming Home” was recorded in the past two years, but sounds like it was done in 1955, it’s a perfect slice of old-soul with a distinct southern flavour. The song went live on “Gorilla Vs. Bear” on October 14th, 2014 and just over two months later, Bridges announced that he had signed with Columbia Records.

For someone who’s got a whirlwind of success around him, Leon has a generally friendly demeanour over the phone, his southern drawl creeping in and out as we talk. Currently on what seems to be a non-stop world tour, I was lucky enough to get 15 minutes with him inbetween his Portland and Vancouver (BC) shows. Here’s what Leon had to say:

NT: You were in Vancouver last night, are these your first Canadian shows?

LB: Nah, before that we played… it was like our second time playing Toronto and Montreal.

NT: So you’ve got a song featured in the new Will Smith movie [Concussion] are you stoked to see it?

LB: Yeah, I’ve already seen it actually but I do wanna see it on the day it comes out with my family, that’ll be pretty fun.

NT: So you have a favourite movie/song combination?

NT: You have a very nostalgic sound, kind of anti-technology. I heard you once offered to give up your phone for your mom. Do you have limits on the amount of technology in your life?

LB: Well when I offered to give up my phone it was like a financial thing. We were just like, strugglin’. I love technology, no limits, it’s all good. I love making classic music, that’s what brings me joy, but I’m not a total weirdo, you know: “don’t use social media”, or “don’t use technology” type person.

NT: Yeah, there was a lot of social media that gave you a huge boost. It’s coming up a year now that your song was featured on “Gorilla Vs. Bear”. Is this the pause and reflect kind of moment?

LB: Definitely a pause and reflect moment. Definitely different in some ways, different because I’ve grown as a singer and a performer since then, but still at heart still the same person.

NT: Considering you’ve been on a very impressive tour since. You were in Glastonbury this summer?

NT: Well how do you go from the Magnolia Motor Lounge, to these huge festival crowds? Has your performance style changed at all?

LB: Yeah, I mean playing at the Magnolia Motor Lounge was at a time where it didn’t really matter. It was at a time where I was playing solo guitar just to get my music out there, my sound. So now being on big stages where it matters, it’s all about me finding that balance of being a good performer without being somebody I’m not. So that’s my thing, I’m definitely growing as a performer and changed my delivery and performance onstage.

NT: Do you ever feel like you’re conducting a sermon onstage?

LB: Uh, not really. If it is a sermon it’s from a very quiet, subtle preacher. I’m not the preachin’, yellin’-my-face-off type of singer. It’s funny. It seems like people think that’s all soul music is. People come up to me and be like: “Are you ever going to scream?” Why? Frank Sinatra didn’t scream; Jesse Belvin didn’t scream. Those guys were chill and just crooners. That’s the type of person that I am.

NT: It’s not the Charles Bradley of new soul.

LB: Yeah, I hear that. Everybody seems to expect a “Dap-Tones” thing and I think we’re still pulling from the same world, but we’re different artists.

NT: Do you think that’s more a New York kinda sound, and your sound comes more from the south?

LB: Definitely, I would say that my sound is more of a southern thing, but if you look at like, St. Paul [and the Broken Bones], he’s a great dude, he’s from the south and it’s still in that vein of like, horn sections, and kinda-funky thing. My thing is just like, I like to have one saxophone player, and the songs that I’m writing it’s just that, very, you know, country vibe. But I like to pull from all those things. It’s really just like singer/songwriter. I’m just a songwriter that writes soul songs.

NT: You’re a very good songwriter and you use a lot of environmental imagery. Is that your key focus in writing a song? Setting a scene?

LB: Yeah, those songs [on Coming Home] I started writing about 2 years ago. So I was really thinking about painting that picture. So sometimes that’s the focus and sometimes it just depends what’s on my mind or what’s on my heart at the moment.

NT: So do you have a lot of stuff on the heart while you’re on tour? Are you writing right now?

LB: Definitely. Really – right now – I just want to make a record that’s way better from the first one, just thinking “How do I go about that?” Sometimes, it’s a personal thing that I’m feeling or certain things that I want to talk about and I’ll just really focus on that. Now it’s like: “Ok, how can I make a song or a record that’s better than the first one?”; “How can I put that into a song?”; maybe paint that picture.

NT: When you say “better” it’s a very vague term. What’s an aspect of your songwriting that you really want to build on?

LB: Just to get deeper, in lyrics. I feel like it’s all good, a song that’s very simple is great, but I want to be able to go deeper when I feel like it. And that’s just one of my main things, to really become a better songwriter. I’m not gonna make the next record an R&B record, it’ll still be under the same umbrella, but just thinking of how can I grow as a songwriter.

NT: Yeah, talking about growing, you listened to a lot of gospel growing up, was there ever any push back to more secular music? I know you’re a fan Silk, which by the way, “We’re Calling You” has been stuck in my head since I saw that Instagram video of you.

NT: What was it like getting into more “sexier” tunes as a kid? Was it exciting?

LB: Yeah, it was always a cool thing for me because I didn’t really like Gospel music as a kid because all the stuff that I heard was like Donnie McClurkin and Kirk Franklin, it wasn’t like listening to real rootsy, gritty, soul music like the Soul Stirrers or the Pilgrim Travelers. It wasn’t like that, so I didn’t really like gospel music. It was cool for me listening to Silk and Genuwine growing up.

NT: What was the first CD you bought?

LB: The first one I bought was The Life by Ginuwine and I was so happy about that.

NT: There was one question that I did want to ask, in an interview with Noisey, you said: “I started asking myself, why aren’t there any other young black men making this kind of music?” Meaning more singer/songwriter kind of music. Do you think that you’ve found an answer to that? Is there an answer to something like that?

LB: I don’t think there is, one has to write something if they’re passionate about it and if you can do it. A lot of black people definitely love the music but it’s just about: “What do you want to make?” and this is just a thing to where I wasn’t thinking “Oh, this is gonna be successful”, it’s just like, man I love this music and I want to do something more than listen to it. I want to make it. I want to be able to honour the people that came before me. Just thinking of my grandmother and grandfather who grew up on this stuff. Just thinking of them I wanted to carry it on. So it all comes from that inner thing, to want to do it.

NT: Do you feel like you’re unique in that approach?

LB: Definitely set apart, I’m not the only one. You have guys like Gary Clark [Jr.], and… I can’t think of this cat’s name right now, mind just went blank… I mean you could probably name a 1000 country artists, or a 1000 indie artists or a 1000 rock artists… That’s good. There’s nothing new under the sun, it’s all about what do you desire to do.

NT: There’s a video of you busking, and I understand that you do that off an on. Is this something that you’ll do on tour, do you get out in front of the venue and start jamming?

LB: Not in front of the venue, it might be on an off day. I like to go out on the subway and pull out my guitar sometimes, in a random place, it’s pretty cool to see people walk by. I was in New Orleans recently and this guy had his microphone out and his guitar and I paid him to let me get on their and sing, just to sing something. People were dropping money in, man. I didn’t take any of the money, I love being out enjoying life and playing music that way cause it reminds me of the past when I was grindin’ all the time. Still grinding, but a different grind.

NT: You were busking a lot when you were still bussing and waiting tables?

LB: Yeah, I mean people back home –  not a lot – would say that I don’t deserve to be around that because I haven’t been working as long or as hard as them – certain musicians. They still don’t know the times when I was out in the street busking. You won’t see any of those guys doing that, and so whatever, I’m glad to be where I’m at now.

NT: You grind hard enough and there’s something at the end.

NT: Well now you’ve hit the sweet spot, do you have any guilty pleasures when you’re chilling after a show?

LB: For me, it’s just about hanging out with my band and meeting new people. I love, like, scotch and whiskey, so that’s a nice little chill time.

NT: Is there a vintage of scotch I should try out?

LB: Man, I wish I could tell you but I just got on that scotch train so I’m just trying to find the right one for me too.

NT: Well I’ll let you get back to the scotch train, have a good tour dude.

LB: Thanks man, nice to talk to you.