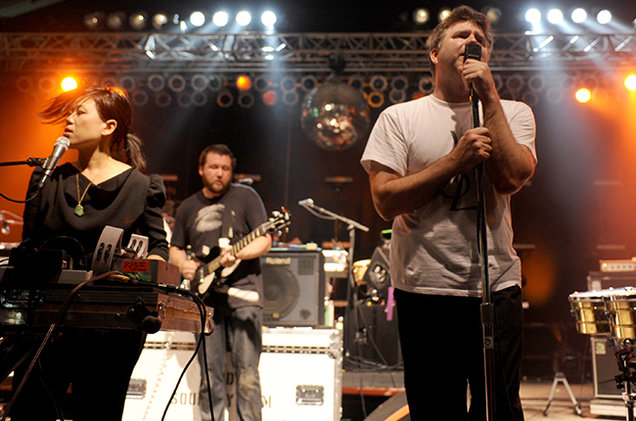 On LCD Soundsystem’s Twitter, James Murphy explained how “Christmas Will Break Your Heart” came together. “There’s been this depressing Christmas song I’d been singing to myself for the past 8 years, and every year i wouldn’t remember that I wanted to make it until December, which is just too late to actually record and release a Christmas song,” Murphy wrote. However, this year he managed to coordinatea few days with his former LCD Soundsystem band mates to record the track.

“Less than 2 weeks after we recorded it, there is actually a Christmas 7″, which feels like something that could only have happened a very, very long time ago,” Murphy wrote, joking that while there were roughly 75 lines of lyrics in his original version, “we’ve knocked down to 8 to keep the suicide rate in check.”

Murphy said of the recording process, “Al Doyle had a short break between Hot Chip tours where he could be in NYC, and Pat [Mahoney] and Nancy [Whang] were home, and Tyler [Pope] agreed to fly out from Berlin for a few days, so we all recorded this together, reserved a pressing plant slot, and our friend Bob Weston was available to master it quickly — so that means, less than two weeks after we recorded it, there is actually a Christmas 7″, which feels like something that could only have happened a very, very long time ago.”

Despite the official denial of previous reunion reports from DFA Records, multiple sources tell Billboard that a reunion is still on and the band will be headlining AEG Live’s new Panorama Festival in New York in 2016, among other appearances.