“Laguna Babe” by The Van T’s

Twin sisters Hannah and Chloe Van Thompson’s debut EP, Laguna Babe, is a collection of vignettes covering the highs and lows of their life. The two front women create songs that are both personal and quirky as they document the positive and negative experiences of dealing with their late teens, no subject too risqué, as they approach their twenties. The EP’s title track is a no nonsense garage rock number, with a heavy reverb sound giving it an other worldly feel, as grunge-inspired guitar licks and Karen O style vocal delivery captivates you, as their no-frills, high energy sound grips you and doesn’t want to let go. This sets the tone perfectly for what’s to come on the EP, with tracks such as ‘Growler’ channeling the surf rock sounds of Hinds and Dum Dum Girls, while providing bassist Joanne Forbes and drummer Shaun Hood an outlet to compete with the twisted synchronicity of dual-leads Hannah and Chloe.

The Van T’s have already graced the stage of T In The Park and Electric Fields as well as recently supporting the brilliant Honeyblood. They plan to spend the rest of they year touring Scotland and beyond as the band begin to break out from their hometown in the west of Scotland.

Laguna Babe is released via Bloc+Music on 13th November 2015. 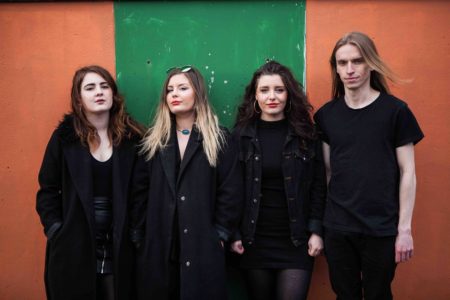