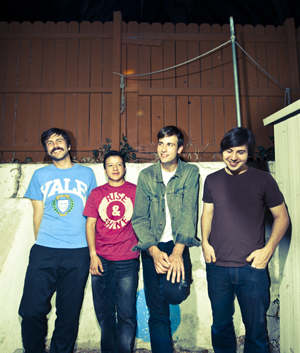 Los Angeles Band LA Font’s LP, Diving Man, is coming out next week. The California indie rock quartet’s sophomore album will be released November 19 on New Professor Music, the boutique label that’s home to Body Parts, Gothic Tropic and many more of L.A.’s best underground bands. Diving Man was produced and recorded (on 2″ tape!) by Eric Palmquist (Wavves, Aloe Blacc, Trash Talk). The band also released an album teaser video, which features snippets of the 12 tracks on Diving Man. The band also released an album teaser video, which features the songs on Diving Man as LA Font singer and guitarist Danny Bobbe wreak Bart Simpson-style havoc on his skateboard.”Smashing the ice cream cone on our bass player’s head was deeply satisfying,” says Bobbe. “I’ve thought about that moment over and over before going to bed the past few nights.”

Danny Bobbe, who was born in Alaska, raised in Utah, and went to college in Montana, brings an outsider’s perspective and a razor wit to the chaos of facing Real Life in a big city for the first time. The album opens with the buoyant “Sensation,” a love song in the language of cheap hucksterism (“I was a card shark in your school yard / I came up with something”), then barrels into the anthemic, wind-in-your-hair rock groove of “Onshore,” a cautionary tale about a relationship in decline that features an instant-classic Malkmus-esque opening lyric (“Loose lips sink relationships / bailing out water on the Titanic / what’s it like at the bottom of the sea? / you become friends with Leo DiCaprio”) and a chorus that is likely to lodge in your head for several years.

But as impressive as Bobbe’s lyrical wit is, he’s just as keen when he’s facing down fear and insecurity. Those feelings are rawly displayed on tracks like the brusque “Diving Man,” a failing-your-way-from-bar-to-bar anthem about homesickness (“my homesick prescription’s got me in a real sick condition / I’m wondering how all of this will end / ’cause I moved out to L.A. to impress the ones that loved me / I’m wondering, will they love me once again?”), and on the gentle “Blood Orange,” where he bemoans the perils of talking about a friend behind his back (“my words, your lips, their ears, context removed”). At times the characters he inhabits in songs are flip about relationships (on “Pretty in Love,” “I never keep track of my debts / just move to a new city / next girlfriend, I bet, she’ll be just as pretty”), but at others they’re tender, even needy (on “Plan B,” “what if you closed your ears dear, pulled up a chair, kicked off your shoes and settled here with me? / that’s a pretty good plan B”). It’s complicated.

Diving Man is a high-energy album of relentlessly catchy rock songs, searing guitar playing and head-nodding grooves. Guitarist Jon Perry’s dexterous leads shine brightly throughout, with your RDA’s-worth of tasty licks stuffed into each song. Bassist Greg Katz and drummer Harlow Rodriguez lay out bold grooves that recall many of 90’s alternative radio’s heroes, from uberlegends like Nirvana and The Pixies to one-hit wonders like The Toadies and even Camper Van Beethoven. And in that vein, Bobbe shows himself to be a deft melodic craftsman as well – he leaves no song without an indelible vocal hook, from the soaring choruses of “Diving Man” and “Sharks” to the sublime hooks in “Blood Orange” and “Apollo 10.”