LA FEMME : The French DO Surf.

Despite their geographically challenged location, here is a collective of French surf-pop connoisseurs.

“We became friends with some Californian surfers who were in Biarritz for surfing contests. We wanted to travel and play outside France so our new friends helped us make connections; we earned a little money with summer jobs and flew to California a few months later. It was crazy; we ended up doing 27 gigs in 3 months!” Since hitting the west coast, the gang’s reputation for finely tuned and taught stark anthems has spread like sea spray.

They have been overwhelmed to find words of praise Jean Michel Jarre and Hedi Slimane – who used La Femme’s version of Oh Baby Doll in his Saint Laurent campaign featuring Cara Delevingne. Guitarist Sacha Got joined by his compadre Marlon Magnée (keyboard player) started La Femme in Biarritz. Once they moved to Paris they soon met up with Sam Lefevre (bass guitarist), Nunez Ritter (percussions) and Noé Delmas (drummer).

With a nod towards 60s yéyé stars France Gall and Françoise Hardy, vocalists Clémence Quélennec, Clara Luciani, Jane Peynot and Marilou Chollet have also moonlighted  for La Femme. “The perfect female voice probably doesn’t exist so there are several singers on the album and it fits well with the group name,” the boys explain. “It suggests that the woman is a mystery.”

Their new LP Psycho Tropical Berlin is a heady mix of psychedelia, rockabilly, electro, and punk infused surf. It is equal parts Gene Vincent, The Velvet Underground and Kraftwerk. “It’s a melting pot of strange, hypnotic and mental moods (Psycho), sunny, positive vibes and beachy surf (Tropical); and cold, binary electro (Berlin),” explains Marlon. Written within the depths of a Parisian basement and surrounded by sheep and trees at a house in Biarritz, those contrasts are clear. ‘On the Board’ hurls down gigantic waves of surf guitar with ease and style, and ‘Hypsoline’ is a monster mash up of trembling synths and deadpan vocals. While a more stripped back Stereolab sweetness is offered by ‘It’s Time To Wake Up (2023’) and ‘Nous Étions Deux’. 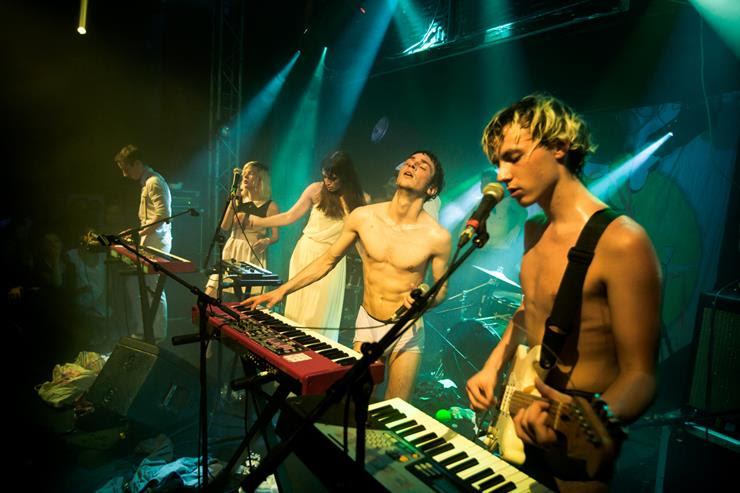