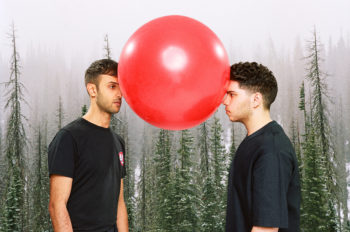 Today, singer and producer duo Klyne share a new video to their single “Still Not Over You.” KLYNE is composed of singer Nick Klein and producer Ferdous Dehzad, and are based in Eindhoven in the Netherlands; the duo make mellow electronic pop that fizzes and glitches like a sunnier cousin to Jai Paul’s harder sound.

Klyne first caught tastemaker attention with their critically-acclaimed debut EP ‘Paralyzed’ on Aesop, as well as their debut remix – a rework of Disclosure’s ‘Omen’ feat. Sam Smith – before signing to Because Music and going on to release their first two singles, ‘Don’t Stop’ & ‘Water Flow’. These early singles also came accompanied by stunningly original videos – the ‘Don’t Stop’ video was directed by choreographer and film-maker Holly Blakey and the ‘Water Flow’ video, directed by Thomas Ralph, shot entirely on iPhones, documented three friends on a road trip across a fractious Europe.

With their new single, ‘Still Not Over You’ out now on Big Beat Records/Because Music, Klyne reveal the new video to accompany their heartbreak jam. Wanting to create a similarly inventive video to their previous efforts, the band teamed up with artist and director Margot Bowman, whose ethos of exploring what it means to be a human being in a digital world aligned perfectly with their layered, cerebral style.

Bowman explains: “We used a giant electronic road sign to test how we experience the world. The inanimate road sign flashes extracts of the song’s emotional lyrics to the public, playing with the expectation that our technology ‘understands,’ ‘knows,’ or ‘recognizes’ us. Like a giant IRL Siri, some find meaning, hope and connection but for others it’s just another cold Tuesday morning.”

The band gives some background on the track: “It’s a heartbreak song but not so depressing that it makes you want to cry*. Although the lyrics are 100% desperate – we’re just trying to keep it playful, so there’s a lot more energy in it compared to our previous tracks.”

*Disclaimer – if this does make you cry, pls feel free to contact Klyne.

Having supported the likes of Years & Years across Europe, Christine and the Queens and making their debut trip to the US with shows in NYC and at SXSW earlier this month, Klyne returns to our shores to headline Pickle Factory on Monday, May 15th.