Kisses To Release “Kids In LA” On Cascine 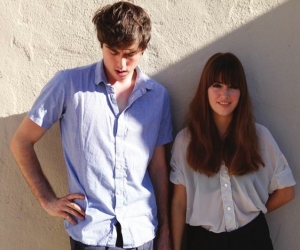 The band’s sophomore release, Kids In LA, is a departure from the luminosity of their first album, focusing instead on the starker wintertime in Southern California. While The Heart of the Nightlife took listeners on a neon-hued journey through Palm Springs at peak vacation season, Kids In LA inverts that thematic motif, opting to explore the empty and slightly-haunted off-season of the vacation world. The glimmering parties and easy social experiences of the first album make way for the disquieting stillness and vacuous silences of abandoned beach chairs, covered pools, and peeling wallpaper.

Kids In LA was recorded over a year and a half and produced by Saint Etienne’s Pete Wiggs and Tim Laracombe. Driven by crisp and thudding drum machines, the record is riddled with the evocative rhythms of late 80s freestyle (Debbie Deb, Lisa Lisa). Paired with lightly-effected guitars and warm analog keyboards, the mood is distinct: cold and anxious, yet rich, inviting, and melodic.

Lyrically, the album’s theme has not departed from the playful and frothy frivolity of the first record. Kids in LA consists of a loose narrative, which follows teenage friends and classmates in Bel Air, exploring the overblown emotions and distinct chasmic boredom of privileged high schoolers. Their lavish parties and a general disregard for others ultimately leaves our cast of misanthropes in a wash of insular social interactions and hazy banality.

Kids in LA is due out May 14 on Cascine and Kisses will be touring this spring and summer in support of the new LP.