Century Palm’s debut LP ‘Meet You’ has just been released on Deranged Records, and to mark the release the band are premiering the video for the album’s first single “King of John St.”

On the video, Paul Lawton states that “I have said previously that ‘King of John Street’ is about coming to terms with anonymity after moving to a big city, and that the song is more about trying to shake yourself out of a slump. A pep talk, trying to remind myself not to take everything so seriously, which I do. I take everything too seriously. We shot the video in November with the help of Priya Thomas with zero budget. We were looking to get good b-roll for the “Then You’re Gone” video, and I just liked the vibe so we made a whole video from the shooting. I come from a DIY background, and I personally like doing as much as we can on our own. We recorded the album ourselves, so it makes sense to me that we make this kind of video ourselves too. The band got up super early on a Sunday morning and recreated my walk to work down John Street in downtown Toronto that prompted the song. There are also some shots from various practice spaces, a show we played on the rooftop of an art gallery in St. Catharines. Penny’s punk band from when she lived in Vancouver, The Drearies also make a cameo.”

Century Palm was initially formed by Payne in 2014 following the dissolution of Ketamines, a cult favourite garage-pop band founded by bassist Paul Lawton that featured 3/4ths of the eventual members of Century Palm (Lawton, Payne, Penny Clark & Jesse Locke) in one or other of its various iterations. Comprised of long time fixtures of the Vancouver and Calgary music scenes, with members playing in bands like Tough Age, Zebrassieres and Dirty Beaches, the group reconnected in Toronto after independently relocating to the city, and quickly began to capture the interest of local audiences, appearing on bills with bands from the thriving local post-punk scene like Casper Skulls, Fake Palms and Vallens, and touring acts like Nap Eyes and Ultimate Painting.

Following a self-released cassette EP and a pair of early singles the band attracted the attention of Deranged Records (White Lung, Tenement, Pleasure Leftists et al), who released the band’s “Valley Cyan” 7 inch in late 2015, and then set to work on an LP for the label in sessions that would eventually become Meet You. It was recorded over approximately 6 months, with Lawton acting as engineer, before being mixed by Vancouver musician Jay Arner and mastered by Mikey Young of Total Control, and according to Payne, the band workshopped the songs relentlessly, cycling through different arrangements and feels without a clear notion of a fixed end point. The album reflects the time spent, engaging with a wide range of compositional concepts and sonic ideas while remaining anchored by a clearly realized aesthetic, exploring, over its ten tracks, the driving rhythms of Krautrock acts like NEU! and Can, the expansive guitar work of Televisions and Wire, and lighting on the nostalgia-tinged New Wave of Psychedelic Furs and OMD, as filtered through the foreboding atmospherics of Gary Numan and Siouxie & The Banshees.

‘Meet You’ is out now via Deranged Records. 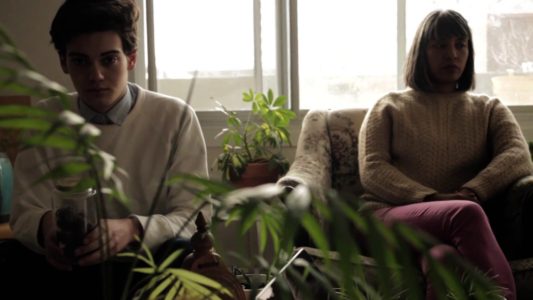 “Then You’re Gone” by Century Palm