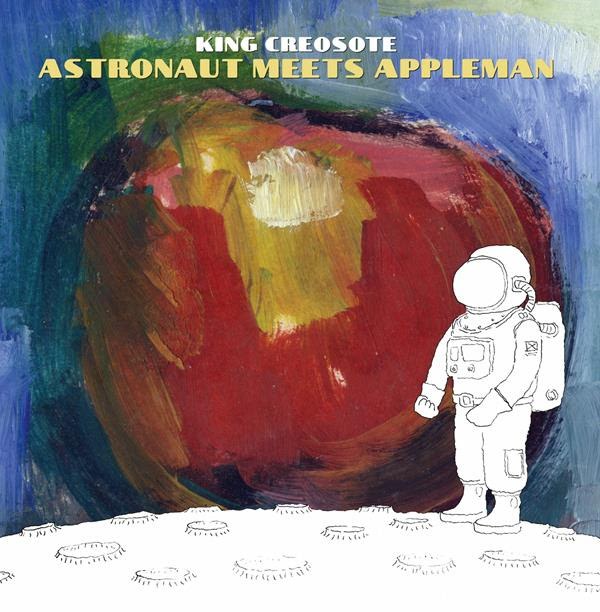 King Creosote returns on September 2nd with his new record Astronaut Meets Appleman. It explores the tension and harmony between tradition and technology – between analogue and digital philosophies – and also invokes a feeling, King Creosote (otherwise known as Fife’s Kenny Anderson) says, of “being caught between heaven and earth”. The first track to be shared is the album’s opener “You Just Want”. A seven-minute piece of hymnal drone-pop, its touchstones are the art of patience, scenes of mild bondage and Venus (in Furs).

Astronaut Meets Appleman follows King Creosote’s From Scotland With Love (2014) and his with Jon Hopkins, Diamond Mine (2011). It arrives replete with a chamber-rock rabble and then some: harps and bagpipes come as standard, as does silence.

Elsewhere on the record, ‘Melin Wynt’ is a lilting bagpipe-techno odyssey. KC explains “It’s an anti-wind turbine song, from a place called windmill. There are no windmills there.” This sense of place, disorientation and absence (in space, time, nature, hearts) underpins Astronaut Meets Appleman – most literally, perhaps, in the silence that unfolds amidst crestfallen lullaby ‘Rules of Engagement’. Or, as he intones on philharmonic lament ‘Faux Call’, “it’s the silence that somehow says it all”.

The KC idiom – equal parts geometry, self-deprecation, cosmic wonder and seafaring poetry – remains intact on the forthcoming album, as does his knack for a killer couplet (see drive-pop calypso ‘Love Life’: “Her jealous accusations know no bounds / Scarlett Johansson was never in my house”). But there is a renewed sense of space and letting the music breathe (lead, even) on the album – all the better to showcase a stunning ensemble cast that includes Catriona McKay (harp), Mairearad Green (bagpipes), Gordon Maclean (double bass), Hannah Fisher (violin, vocals), Sorren Maclean (guitar, vocals) and Pete Harvey (cello), alongside KC’s regular rock diviners, and his baby daughter Louie Wren (on ambient reverie, ‘Peter Rabbit Tea’).

“I wanted to push myself songwriting-wise, so I went in with hardly anything and had to wing it,” KC reveals. “I wanted to try and flip the clock all the way back to sound like a younger me – or a less cynical me. In the past, I’ve been fixated on twisting and wrenching every line, but here I’ve let that go a bit, and I hope that lets you concentrate more on the music; on what’s going on around it.”