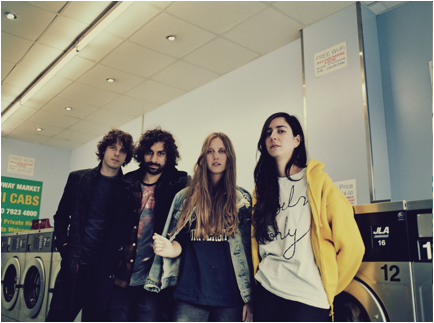 Kid Wave have dropped  their new video for their single, “Honey.” The video directed by Kid Wave collaborator Steve Glashier, was shot at the bands recent show at London’s Sebright Arms.

The quartet’s debut album Wonderlust is influenced by life on the Californian coast rather than London, where Kid Wave reside. This is music that’s delivered with an uplifting sense of youthful wild abandon, as well as a wistful sense of melancholy too. Occasionally dark clouds obscure their sonic sunshine and there’s a nagging sense that no summer lasts forever.

Kid Wave craft slacker indie rock and transcendental dream-laden pop of a distinctly early 90s bent – music to lose yourself in and give your life to. You can hear shades of Lush and Dinosaur Jr. in their sonic sunshine. But these are all bands largely operational before the members of Kid Wave were even born – artists who singer Lea readily admits she doesn’t always necessarily know much about.

Wonderlust. It’s an aptly-titled for an international band whose founding members’ wanderings lead them to congregate in the capital. Kid Wave began life as a solo when Lea Emmery relocated from Norrköping (a city sometimes referred to as “Sweden’s Manchester”) to London in 2011 at the age of 18. She knew no-one, had no band, no contacts. But she did have drive, vision and ambition – insane levels of it, in fact. Several years playing classical piano at a local college in Sweden had lead to a stint in an all-girl punk band and though that tenure was short-lived, there was simply no turning back. Noise beckoned.

What began life as solo demos soon morphed into Kid Wave when Mattias Bhatt, part of the same clique of indie kids back in Norrköping an now in London, signed up. From Perth, Australia, Serra Petale was teaching drums at a college where Lea was studying sound engineering and seemed “impossibly cool.” She was in. Bassist Harry Deacon was a friend-of-friends.

A clutch of early songs were recorded with Rory Atwell (Palma Violets, The Vaccines, Male Bonding) production, before Lea sent some music to Heavenly Recordings – “and no-one else”. Kid Wave had no management, no team of people fighting their corner. Just songs.

2014 saw Kid Wave playing shows with The Wytches, TOY, The Orwells, Childhood and more recently with Jimi Goodwin at the Heavenly 25 weekend in Hebden Bridge. In autumn 2014 they recorded Wonderlust at the magical analogue wonderland that is Eve Studio in Stockport with producer Dan Austin (Doves, Cherry Ghost). Beyond the studio the lashing rain and dark north-west nights were banished by the youthful exuberance and sugared sounds being created within. 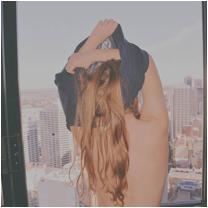