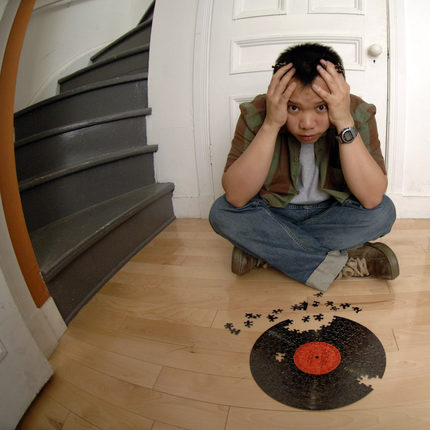 Recently, DJ Kid Koala announced two upcoming Space Cadet 2.0 shows in Toronto as part of this year’s Luminato Festival. Koala’s updated Space Cadet show promises to be a once-in-a-lifetime experience with the addition of custom scents (you are reading this right!) to his already blissfully fun sensory mix. On top of last year’s successful 12 Bit Blues album and his Vinyl Vaudeville tour, Kid Koala has also been in to the studio creating music for film, most recently, the soon-to-be summer blockbuster, The Great Gatsby.

Last fall, Oscar-nominated director Baz Luhrmann, and co-producer Anton Monsted, came to Kid Koala’s Vinyl Vaudeville show in LA and were excited by his aesthetic and totally unique approach to music. They immediately asked him if he would be interested in contributing and Kid Koala’s version of the Beyoncé/Jay-Z hit “Crazy in Love” was born.

Kid Koala’s expansive repertoire includes musical contributions on several other film scores, most recently Rian Johnson’s critically acclaimed Looper, Scott Pilgrim Vs. the World and Shaun of the Dead. Other notable film credits have ranged from The National Film Board of Canada, Adult Swim, Sesame Street and the Cartoon Network.