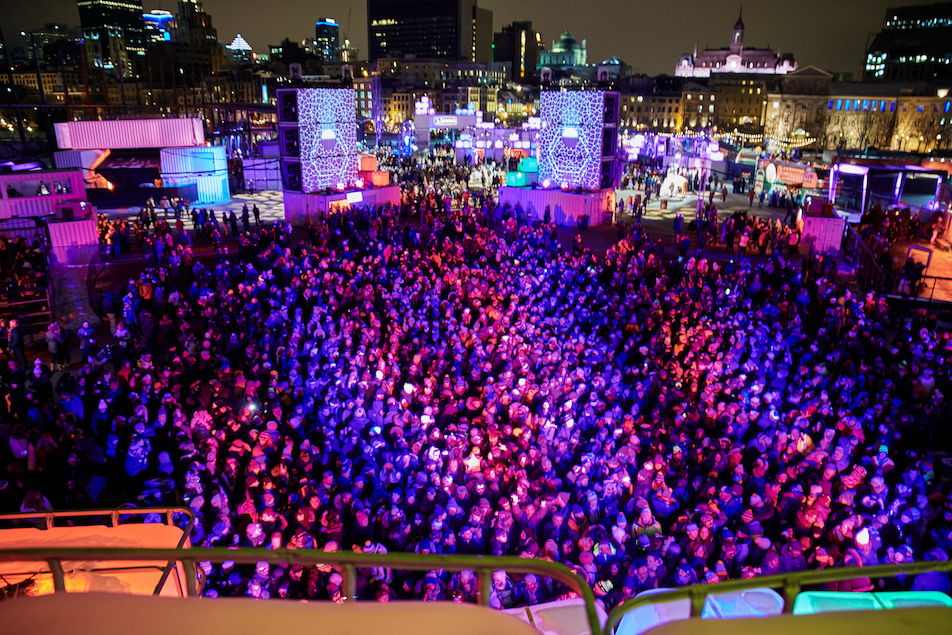 If you’re Igloofest and you’re trying to start off the newest edition of the festival with a
bang, what better way to do that than with a local talent made good? Kaytranada’s had quite a
whirlwind 20 months since the release of his triumphant 2016 debut LP 99.9%, but when he
plays at home, it’s always an event. Despite only a mildly chilly temperature of -4° that was
perhaps made 10° colder by Igloofest’s location right on the Quai Jacques-Cartier, the producer
born Louis Kevin Celestin brought yet another night of funky, disco-inflected hip hop beats to a
huge, element-braving crowd in typically stylish fashion.

Igloofest itself is well worth the price of admission even when there isn’t a marquee name
topping the bill: beats of various electronic subgenres blaring from the two stages, fire pits
everywhere, people in wild costumes (including a guy dabbing while wearing a snowman outfit),
creative ice sculptures, many options for booze, and even a freaking slide. Some nights are more
mellowed out attendance-wise, but others are nothing short of electric – especially when the
person DJing is an major commodity. With Kaytranada, Thursday night was one of those latter
nights, as evidenced by the monstrously long lineup along the pier just to even get in to the show.

While he didn’t talk much – his bilingual stage banter often involved him trying to get the
crowd to make some noise, or to shout out the South Shore (he hails from Saint-Hubert) – he let
his impressive and smoothly-mixed collection of tunes speak for itself, his infectious energy as a
performer shining through even more in an outdoor setting. It’s not often that an artist of his ilk
headlines the Sapporo Stage with such a huge crowd before them – that tends to happen for more
strictly electronic or EDM artists over the years – but Kaytra’s ability to defy genre convention
and subsequently offer up a refreshing and crowd-pleasing sound is his trademark. His
accompanying visuals, including archive footage of people dancing around on roller skates,
added an extra bit of oomph to his performance and aesthetic.

From “Glowed Up” to “Leave Me Alone” to “Lite Spots” to Chance the Rapper’s “All
Night” to “At All” and everything in between, his set was a rousing one that got people bouncing
and swaying throughout, even if his attempts to hype up the crowd seemed to fall on deaf ears at
times. He’d just about cap the night off with his name-making remix of Janet Jackson’s “If”
before teasing a collaboration with Pharrell Williams immediately afterward, from his
sophomore album to be released this year.

Although Kaytra would add some other newer productions into the equation here and
there – GoldLink’s “Meditation” and his remixes of NAO’s “Get to Know You” and Rihanna’s
“Kiss it Better” come to mind – the set was largely a victory lap following the lengthy promotion
of 99.9%. That’s hardly a bad thing, though: his groovy mix of tracks from that album plus a
career-spanning selection of other past remixes and productions is a microcosm of how much of
an impact he’s made on Montreal’s music scene and beyond.