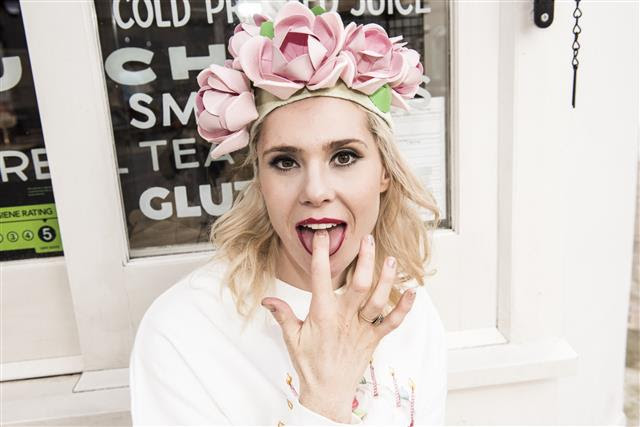 British artist, actress and activist Kate Nash has released a brand new track and official video titled “My Little Alien.”
Shot in the Californian desert and staring her very own pet pooch Stella, “My Little Alien” is a loving tribute to her rescued “fur-baby” and as the holiday season approaches, comes with a friendly reminder to “adopt not shop” when it comes to rescuing a four legged friend.

“’My Little Alien’ was written after a trip to Rachel, Nevada, where I saw a UFO for the first time.” Explains Nash. “I took my rescue pup on the trip and I realized she is my best friend and although I have never met an alien she is like my little alien in a way. When I rescued her from a man in a coffee shop who wanted 20 bucks to get off drugs, she saved me at a time when I needed it most. Sometimes it feels like we’re both from another planet. This song is about loving the strange.”

On the video, directed by Tyler Monsein, Nash continues. “We wanted to recreate the feeling of being the nomads that we are. Neither of us quite fit into the boxes we should but when we are together it makes sense. So we got back on the road in a vintage Chinook and drove to Area 51!’”

Kate Nash has been confirmed to play Rhonda is the upcoming Netflix Original series “G.L.O.W.” Produced Jenji Kohan (Weeds, Orange is the new Black), “G.L.O.W” (aka Gorgeous Ladies of Wrestling) was created by Liz Flahive (Homeland) and Carly Mensch (Orange Is The New Black) and is a 10-episode comedy inspired by the real story of the 1980s female wrestling league.