Kasper Bjørke returns with new album, After Forever, which he announced today for a September 22nd release on HFN Music. Moving away from his previous trademarks of 70s-inspired disco, Kasper explores new terrain in contemporary, melancholic synth pop, with his productions merging themselves into a multi coloured soundscapes highlighted by echoes from Post Disco/Punk, Kraut and New Wave.

The Danish producer would tell you that After Forever is his boldest and most elegant statement to date. The scene had already been set by two lead singles: “Rush” featuring Tobias Buch – and “Sylvia” featuring CTM aka aka Cæcilie Trier from Choir of Young Believers. Elsewhere on the album, the Danish producer continues to demonstrate his flair for beautifully nuanced collaborations. “Lies” features the talents of New York’s Nomi Ruiz (previously of Hercules and Love Affair), and “Marbled Blood” is a bubbling deep slow motion drive straight down into the void, where Danish artist Soho Rezanejad provides the narrative acid trip.

“After Forever is good for dark, sad dancing – or a headphone journey inwards” Kasper explains. “I feel like I really went somewhere else on this album, to a place where I haven’t been before. Out of my safety zone and into a darker space. I’ve worked on demos and ideas in New York many times before – but this time I brought these instrumental demos from Copenhagen to New York and basically finished the tracks there with Kurt. Obviously working with him and being in that studio was a special experience… and I think you can sense that in the music as well.”

The album exhibits an equally strong and special visual presentation of the musical experience within. Taken from Kasper’s private collection, the album takes its name from the stunning piece ‘After Forever’ by the American, Brooklyn based visual artist John Copeland. A detail of the work makes up the hypnotizing front cover and is only revealed as the whole work, on the inner-sleeve of the marble grey coloured vinyl.

“I had the pleasure of meeting John shortly after I acquired this particular piece and also had the opportunity to visit him in his studio in Brooklyn. He is by far my favourite painter, so it was a really big experience for me. We talked about his work in progress for his next exhibition and I realized that while I was making my album, I was maybe brought to a similar creative space as John Copeland uses in his painting techniques; adding layers after layers and deconstructing the obvious, exploring new ways of creating what you do – instead of taking the same, safe roads as before.”

Kasper Bjørke
After Forever
Out September 22nd on HFN Music 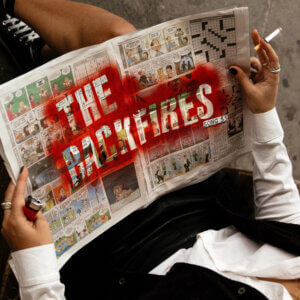