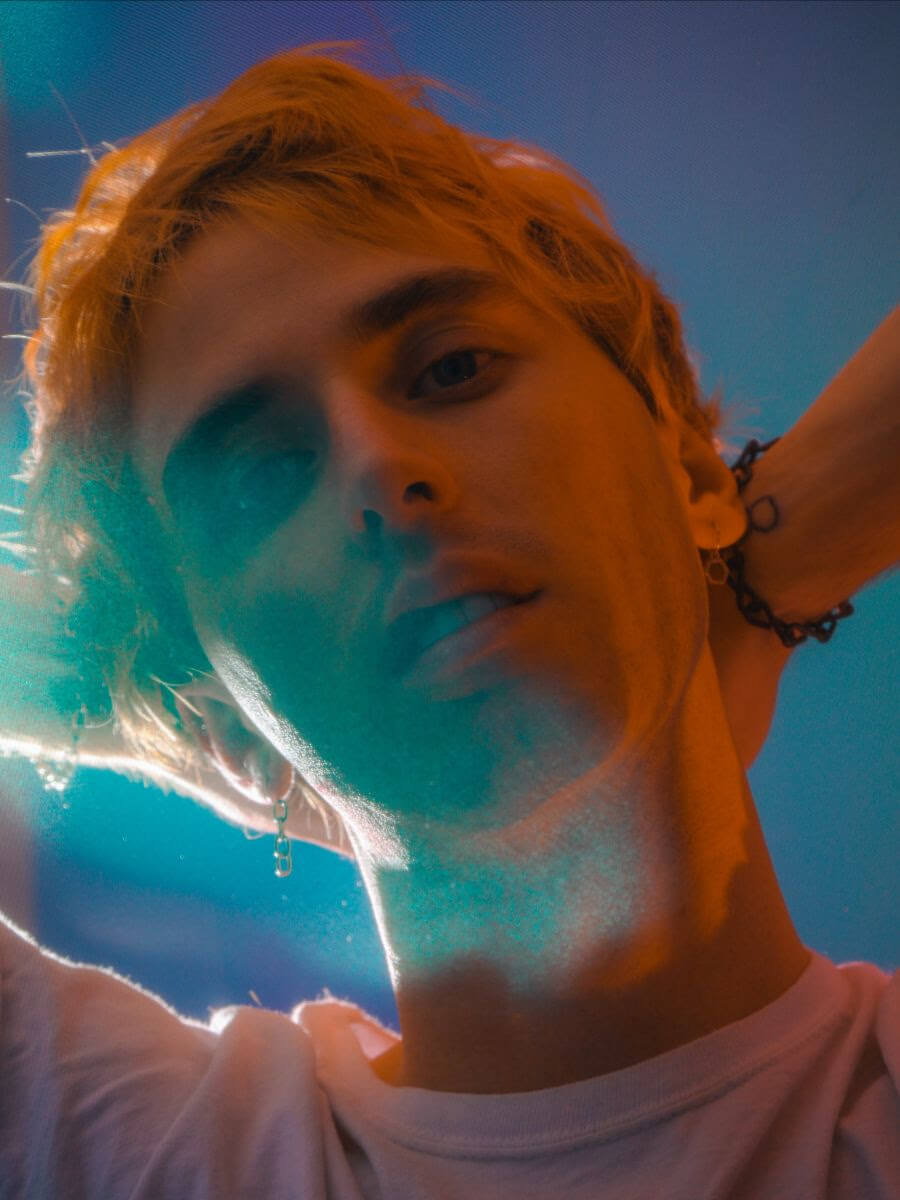 Producer/singer jxst j AKA: James Pratley Watson "Alone"
Share on TwitterShare on PinterestShare on PocketShare on RedditShare on FacebookShare on Email

Producer/singer jxst j AKA: James Pratley Watson, writes, sings, and produces from his NYC apartment. He is inspired by dream pop, indie and trip hop, and blends them together to make his own unique sound. Watson is a visual artist just as much as he is a musician. Now he is bringing his visual literacy to jxst j with a trippy, arthouse aesthetic shot primarily on super 8 film. jxst j also maintains a growing team of visual collaborators, including filmmaker Andrew Balasia (Phil Good, Russian Baths), photographer Roman Koval (Joji, Nectar, Eckhaus Latta) and designer Miles Wintner (Cherry Glazerr, (Sandy) Alex G).

During the last year, jxst j has been in his bedroom, listening incessantly to all kinds of music and making tracks on his laptop. With his mix of stretched samples, acoustic instruments, analog synths and silky vocals, J achieves a polychromatic sound that will find a home with fans of Toro y Moi, Joji, Blood Orange and Still Woozy, to name a few. While taking a mostly DIY approach to his project, jxst J’s releases include contributions from Luna Shadows, Thom Powers (The Naked and Famous), Chris Sorem (Los Lobos, Rufus Wainwright), Jacob Mann (Knower) and Brian Green (John Legend, Lily Kershaw).

jxst j has just finished his debut album, which he is teasing with single releases over the summer. Each release will be accompanied by a music video, with the album and other visuals coming in the Fall. In the meantime, J is designing merch and putting together a live band for when concerts begin again. jxst j plans for his live show band to have several members, so that his sound – while created alone – can expand into something bigger for the live experience.

Northern Transmissions: Where were you when you wrote “ALONE”? What was the production process like?

jxst j: I was living in Brooklyn over the summer in 2020 and holed up like everyone else. I only had my guitar and my Juno 106 synth, but I prefer working with limitations because it makes you explore each instrument and sound to their full potential. The lyrics came from this place of isolation, but I was actually outside riding my bike while writing a lot of the words. It was important for me to keep in mind the possibility of normalcy and connectedness while dwelling on isolation, because I find those kinds of tensions compel the writing process.

NT: Tell us the story of the music video, where did the idea come from? And where did you find that massive man?

J: I was taking walks through Fort Greene Park in Brooklyn everyday over the summer just to keep sane. There were all these people working out on the iconic steps in the park. They all looked so motivated and I felt nothing like that. I went home one day from one of these walks and this image popped into my head of a bodybuilder carrying me around the park, kind of as a visual hyperbole for that contrast I was feeling. I found Mark Haynes through a casting company that I’ve worked with in the past and he is indeed very massive – 6”4’ and 270 lbs! He was a star and we became good friends by the end of the day. I wanted him to represent one form of traditional masculinity and me with my suit and tie another kind. Paired together we kind of make the whole idea of masculinity seem ridiculous, which I think is the real heart of the video.

NT: How does “ALONE” fit into the context of the album?

J: The songs on the album have an arc that traces a relationship from start to finish. This one is going near the beginning because it’s about looking for new love after having gone through the wringer romantically. That experience can break you down, but it also teaches you what you do and don’t want, and I find that a lot of confidence can spring from that.