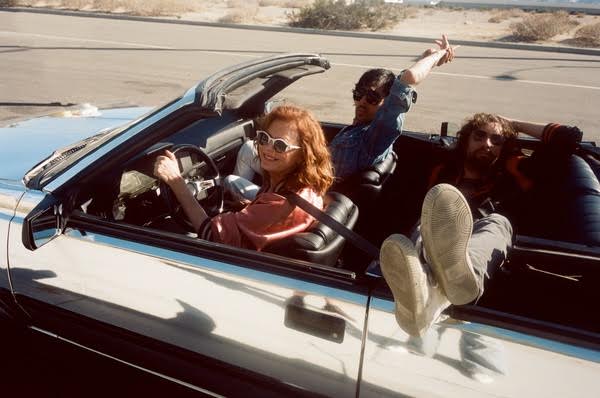 French duo Justice have premiered the Susan Sarandon-starring video for their new single, “Fire,” today. “The perfect soundtrack for an everlasting summer”.

“Fire” is taken from the band’s third studio album Woman out now via Because Music / Ed Banger Records. Woman is the band’s first album in five years and contains ten brand new tracks including singles “Safe And Sound,” “Randy”, “Alakazam!” and “Fire”.

The Director of the video, Pascal Teixera, notes:

On a hot summer afternoon, Gaspard and I were in Xavier’s kitchen, collectively daydreaming about washing a car. The year we like for car design, the make, where that could take place, how much soap, the mood, the sun, and there should be a woman to go cruising with, an iconic mix of cool, allure and strength. Susan Sarandon of course! And then a couple months later we’re in the desert, with the car and a lot of soap, and by some weird miracle there she is, even more amazing than we had fantasised her to be, ready to go for a drive.

Woman is out now on digital, CD and vinyl formats through Because Music / Ed Banger Records. The album’s artwork was created by Charlotte Delarue.