On the heels of a second run of North American shows, Jungle has announced they’ll return this fall to play over 20 tour dates across North America in the largest rooms they’ve played to date in the country. The tour will be in support of their self-titled debut album out July 15 on XL Recordings.  Debuting a brand new live production and now seven members, the band will return to Los Angeles to kick off the tour with a show at The Fonda Theatre. From there the group will travel across the states and back making stops in Austin, TX, New Orleans, Nashville, New York City Seattle and more (full list of dates below).  In addition to these dates Jungle will make appearances at Lollapalooza, Corona Capital and Treasure Island Music Festivals.Based around a core musical duo known as ‘J’ and ‘T’, Jungle will expand to a seven piece live band. 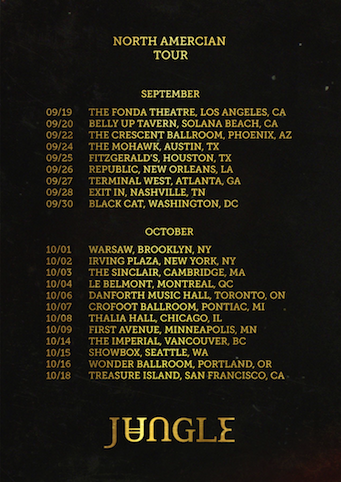