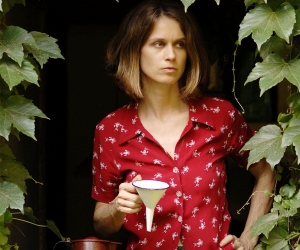 Born in Argentina, Juana Molina grew up in a musical environment. Her father, a revered tango singer/composer and her mother a talented actress. Molina took up guitar at age five and was exposed to her parents’ extensive record collection. Following the military coup of 1976, the Molina family fled the country for Paris. During her formative teenage years in France, Juana’s outlook on music expanded by regularly listening to radio stations that featured music from around the world.

When Juana returned to Argentina she was determined to pursue a career in music. She knew she had a knack for doing imitations, and decided to audition for a TV program where she was hired on the spot. Her popularity rose and three years later she had her own successful comedy show in Latin America, becoming the most popular comedian in Argentina. Seven years after her TV debut, Molina took the brave resolution to cancel the show and start making music again, releasing her first album in 1996. After the release of her second and third albums she quickly became the darling of the international indie/electronic/folk scene. The New York Times has said, “Ms. Molina doesn’t imitate anyone. She has too much fun just being herself.”

And now, the bewitching Juana Molina is back with a new album, Wed 21, out October 29 via Crammed Discs. The album was composed, performed, recorded and produced by Molina in her studio in Buenos Aires. On the new album she’s expanded her palette of instruments, incorporating electric guitars, bass, drums and inventive electronics, giving Wed 21 a richer, broader sonic spectrum.In some of the tracks, Juana comes as close to a pop song format and to a full band sound as she ever did, while some other pieces are sinuous excursions through gamuts of feelings & textures. Guided as always by her trademark spirit of experimentation and her deep melodic sense, Juana has definitely come up with a masterpiece. As the album unfolds, each of the eleven songs reveal new delightful ideas, unexpected turns and inspired atmospheres.

Juana Molina will be performing a string of shows around Europe in November and will be back for extensive touring from early 2014 and on. Her live performances combine live loops, effects created on-the-fly and her deft acoustic guitar playing, creating a lush sounding as well as visually compelling experience.