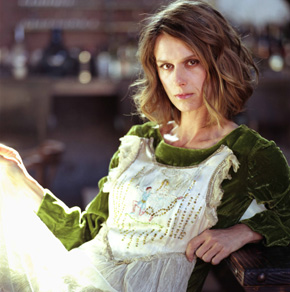 Today, Juana Molina’s premieres the video for “Eras.”This is a fantasy tale about the Bichapong, a creature which first appeared in Alejandro Ros’ artwork for Juana Molina’s new album Wed 21. Juana and video director Mario Caporali worked together on a script which portrays this threatening, yet tender character. Its mummy-like hands carry dangerous scissors and prepare mysterious potions for the “guests” of a strange party. The story takes place in an old house, where the Bichapong resides.

The bewitching Juana Molina is back with a new album, Wed 21, out now via Crammed Discs. The album was composed, performed, recorded and produced by Molina in her studio in Buenos Aires. On the new album she’s expanded her palette of instruments, incorporating electric guitars, bass, drums and inventive electronics, giving Wed 21 a richer, broader sonic spectrum. In some of the tracks, Juana comes as close to a pop song format and to a full band sound as she ever did, while some other pieces are sinuous excursions through gamuts of feelings & textures. Guided as always by her trademark spirit of experimentation and her deep melodic sense.

Juana Molina will be performing a string of shows around Europe in November and will be back for extensive touring from early 2014 and on. Her live performances combine live loops, effects created on-the-fly and her deft acoustic guitar playing, creating a lush sounding as well as visually compelling experience.

Mario Caporali is an Argentine artist who works with music, photography, video art and performance. He currently directs the collaborative and experimental art Project GUO CHENG (www.guocheng.com.ar). Performances, photography and videos by Mario Caporali have been exhibited in solo and collective shows in galleries and museums in Argentina, Brazil and the UK. In 2007, Björk selected his video for the song “Innocence”, which was released by One Little Indian Records as part of the “Voltaic” DVD box.