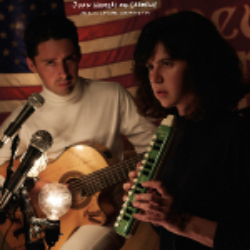 Last year, Queens-based artist Juan Wauters released his debut album N.A.P. North American Poetry. Ever since, he has been playing back-to-back tours, his most recent being a venture across Europe. Next month, Juan will be at it again as he embarks on his first North American tour of 2015. Tour dates below.

To kick off this tour, Juan will be releasing the EP Wearing Leather, Wearing Fur, the first fully collaborative recording by Juan Wauters and Carmelle Safdie following their duets on N.A.P. North American Poetry. This continuous, 13-minute composition presents a concise suite of song, poetry, and instrumental passages that Juan and Carmelle developed through live performances since 2012. On Wearing Leather, Wearing Fur, Juan and Carmelle share the lead, navigating the listener through stages of varying emotional intensity as they sing themes of external identity and personal freedom.