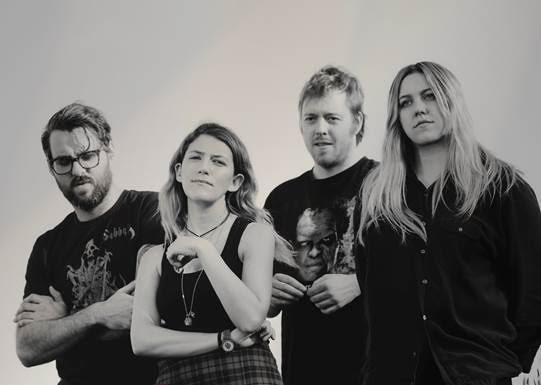 Today, No Joy, reveals the soap-operatic new video for “Judith”, from the band’s new album More Faithful. The Montreal four-piece heads out on an extensive North American tour on October 10 with DIIV and will perform at Toronto’s Danforth Music Hall on October 11 and Vancouver’s Fortune Sound Club on October 20.

More Faithful is No Joy’s third full-length album and debut for Arts & Crafts. Throughout the album, singer / guitarist Jasamine White-Gluz, guitarist Laura Lloyd, drummer Garland Hastings, and bassist Michael Farsky (formerly of Dirty Beaches’ live band) push themselves to new peaks of intensity. The album bears the fruit of a band that has refined its work ethic in the gulf of time between recording sessions. The outcome is a juxtaposition of unrest and calm, beauty and chaos, truth and fantasy.

For More Faithful, No Joy worked with musician and producer Jorge Elbrecht (Ariel Pink’s Haunted Graffiti, Chairlift, Lansing-Dreiden, Violens). Recording was split between tracking at Brooklyn studio Gary’s Electric and an old farmhouse in Costa Rica. In this rural Costa Rican setting, Elbrecht created a makeshift but nurturing studio environment where he and No Joy mixed, overdubbed, and cut vocals for 12 hours a day. Repairing themselves to an isolated environment strengthened No Joy’s regimented approach to making a record that satisfied their vision.

At times More Faithful is heavier than anything they’ve done yet, while also their fastest, riffs shooting upward in discord and drifting down in angelic harmonies. The band recently released a live-shot music video for “Hollywood Teeth”, capturing the frantic energy of the band’s recent live performances.