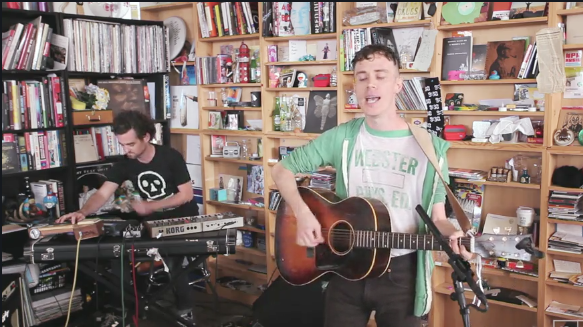 After the release of his debut album his Fat Possum-released Until the Horror Goes and tour with Sunns (for whom he also produced their latest record), John Congleton (St. Vincent, SWANS, Explosions in the Sky) filmed a Tiny Desk Concert, now live. Playing songs from his album. John Congleton and the Nighty Nite will also be joining AJJ on tour this August.

John Congleton’s debut solo album, Until The Horror Goes, released this past April,compared to past work in The Paper Chase and producing records for the likes of St. Vincent, David Byrne, and Chelsea Wolfe, Congleton creates a kind of horror-gospel mixing unflinching examinations of modern life with humor, high art with low culture. Pop melodies are given voice by massive and unexpected orchestration live within wild sounds and atonality. Congleton will be taking his tunes on the road this August through Arizona and California with AJJ (formerly Andrew Jackson Jihad).

Catch John Congleton and the Nighty Nite on Tour: