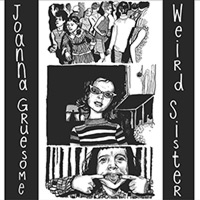 Kicking it against sexism and homophobia, nothing is off-limits, drawing inspiration from DIY scenes such as Riot Grrrl/noisepop/C86 /K Records as well as post hardcore like Drive Like Jehu/Converge and the art rock of The Velvet Underground and My Bloody Valentine, Joanna Gruesome offer a staggeringly diverse album, unexpectedly quiet and surprisingly loud.