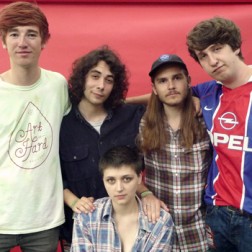 Cardiff-based noisepop five-piece Joanna Gruesome are set to release “Sugarcrush” as a digital single on November 18 via Slumberland Records. The single’s B-side is a cover of Galaxie 500’s “Tugboat.”

Joanna Gruesome’s debut ‘Weird Sister’ is out now via Slumberland Records (US) and Fortuna Pop! (UK) on vinyl/CD and digital formats.

Cardiff-based noisepop five-piece Joanna Gruesome will be releasing their terrific debut album via Fortuna POP! (Europe) and Slumberland (USA) in September. Brimming with  pop melodies and spiked with dissonant fuzzy jangle, their songs are shot through with loud discordant feedback and super-fast, hardcore punk drumbeats. This album sees their first foray away from recording in a living room to a proper studio under the guidance of producer MJ of the much lauded Hookworms.

Kicking it against sexism and homophobia, nothing is off-limits, drawing inspiration from DIY scenes such as Riot Grrrl/noisepop/C86 /K Records as well as post hardcore like Drive Like Jehu/Converge and the art rock of The Velvet Underground and My Bloody Valentine, Joanna Gruesome offer a  diverse album, unexpectedly quiet and surprisingly loud.

Awash with nods to mental illness and the dark recesses of the mind, the record is littered with references to the devil or zombies and allusions to comic books. “Secret Surprise”, in which mental illness takes a physical form and is fought using razor blades. Or “Anti-Parent Cowboy Killers,” which is about stealing a scooter and driving it into the ocean when you should be in school LEARNING. Or “Sugarcrush,” about spending a summer burning knitwear.

They have built-up a live reputation, blending obnoxiously loud guitars and the occasional band uniform, with a high energy performance dispersed with quieter reflection, boy/girl vocals and teenage angst.