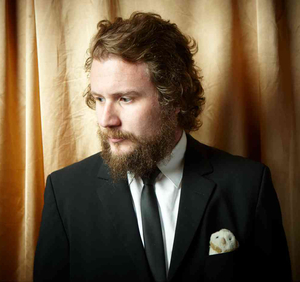 Jim James’ has shared the surreal new video to his single ‘A New Life’, featuring the My Morning Jacket frontman giving an acoustic performance in a darkened room, before opening a door to a surreal new world; dancing with a buffalo-headed woman in the desert, flanked by backing dancers. ‘A New Life’ is taken from James’ new solo album, Regions of Light and Sound of God, out now on V2.

James drew inspiration for the song from a vintage book entitled God’s Man, a wordless 1929 woodcut novel by Lynd Ward, for the song, making parallels between his life and the life of the novel’s protagonist. “There’s a scene [in God’s Man] where the main character’s like chased out of town and he falls off a cliff and is lost and kind of injured and this woman finds him and nurses him back to health and they fall in love,” James says. “And they have a child together and they have this new life that’s kind of coming. That had happened to me. Like, I had fallen offstage and gotten injured and gotten super dark and fell in love and all that was happening at the same time I was loving this book. It was like I had this beautiful illustration of what was happening in my life.”