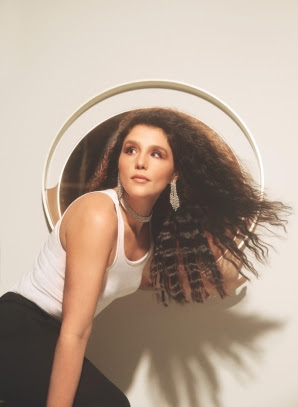 Jessie Ware has returned with the new single/video “Spotlight.” The track arrives ahead of her fourth album What’s Your Pleasure?, due out on June 5 via PMR Records / Friends Keep Secrets/ Interscope Records.

The new single is co-written by Jessie and her close friends Danny Parker, Shungudzo Kuyimba and James Ford (who also produced and mixed the single). Serving up a divine slice of elegant Nu Disco, “Spotlight” is an incisive, refreshingly positive throwback that channels the energy of classic funk and dance.

The video, also out today, was directed by Jovan Todorovic in Belgrade aboard former Yugoslavian Dictator Tito’s infamous Blue Train. With strobe lights and high-end visuals the video focuses on the iteration of human interaction, from rising sexual tension to falling emotions all in a club esque environment that sees Jessie flex her dancing skills. “Spotlight” continues to showcase Jessie’s evolution as an artist.

Jessie says, “It feels so amazing to be back making music, so much has happened recently. Some crazy exciting things but I feel so happy to be back to my first love. Music was the first scene that truly embraced me!!

I feel like these last few years I’ve had to do some exploration to figure out what I wanted to write about musically again and learn new things about myself. I’ve been yearning for that escapism, groove and maybe it’s time to say goodbye to the melancholy Jessie.

I’ve spent the last year in the studio with an old friend of mine James Ford, working with a handful of great friends to create a record I’m truly proud of. I’m happy to share with you my brand new single ‘Spotlight’ taken from my fourth album. It’s melodramatic, it’s romantic, it’s everything that I love and it’s got a bit of a beat. This is the first taste of my brand new album ‘What’s Your Pleasure?’ which will be out 5th June.

I can’t wait to get back on the road and see you all…It’s been far too long but for now let’s have some fun and hope you enjoy the music! x ”

The album recording process has been a transformative period for Jessie that has seen her reconnect with her roots. What’s Your Pleasure? at its core is an album that is rooted in club culture and explores the themes of femininity, freedom of imagination and escapism. The album contains credits from Kindness, her close friends Danny Parker, Shungudzo Kuyimba, Clarence Coffee Jr., producers and DJs Benji B, Midland, Morgan Geist (Storm Queen), Matthew Tavares, the unmistakable guitar twangs of Metronomy’s Joseph Mount and James Ford from what has become the album’s creative center – his home in London.