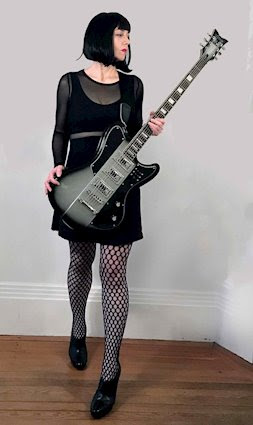 singer-singwriter Jenn Vix has released a new video for “Complicated Man”. The track is off her new release Unlocked, which was directed, and edited by Renan DeAraujo, a 27 year old, Brazilian filmmaker who loves to tell stories with light and rhythm. The video features Jenn Vix herself, along with actor Michael French.

“My interpretation was to put Jenn’s personality on the screen, and in particular, the overall feeling of the trck; a mysterious and delicate mood, at the same time. I was trying to express the character’s point of view,” says DeAraujo.

Based in Rhode Island, Vix is an American solo electronic-rock recording artist, songwriter, producer and recording engineer, who has, over the years, ventured into other genres including alternative rock, trip hop, darkwave, modern new wave and electro-industrial.

“I wanted to explore different sounds, and it felt good to do so. After my illness, it took me a year and a half to be able to even listen to music again. Change is scary, but it can also be refreshing. I recently had to burn a few bridges, but they say that the brightest light can come from the bridges you burn. I agree,” explains Jenn Vix.

Jenn Vix has collaborated with some interesting artists, including members of The Cure, Tin Machine and in bands for David Bowie and Iggy Pop. The track ‘Unlocked’ features John Ashton, original guitarist of The Psychedelic Furs, . Ashton previously collaborated with Jenn Vix twice previously, on tracks ‘The Woman with No Fear’ and ‘Weirdo’, which are found on her five-track EP ‘Strange Buildings’.

Danny Chavis of The Veldt also produced a remix of ‘Complicated Man’, as well as contributing guitar and other instrumentation here. His background is wrought with collaborations with TV On The Radio, Mos Def and Lady Miss Kier (Deee-Lite), and touring with Phantogram, The Brian Jonestown Massacre, The Pixies, Throwing Muses, Echo & The Bunnymen, Cocteau Twins, Manic Street Preachers, The Jesus and Mary Chain, Oasis, Chuck D, Living Colour, and Schooly D.

Jenn Vix has collaborated with Reeves Gabrels, current guitarist for The Cure and former guitarist for David Bowie and Tin Machine, on her singles ‘In the House of Dark Shadows’ and ‘Speed Of Light’, and also with Andy Anderson (The Cure and Iggy Pop) on singles ‘Eyes Roll Back’ and ‘I Don’t Trust You’. Her double A-side single ‘F*ck, Rinse, Repeat / Burn’ involved Dirk Ivens, Belgian electro-industrial pioneer of Absolute Body Control, The Klinik and Dive.

The ‘Unlocked’ EP will be made available on the usual streaming and store platforms, but is already available for pre-order on Jenn Vix’s Bandcamp at https://jennvixmusic.bandcamp.com/album/unlocked