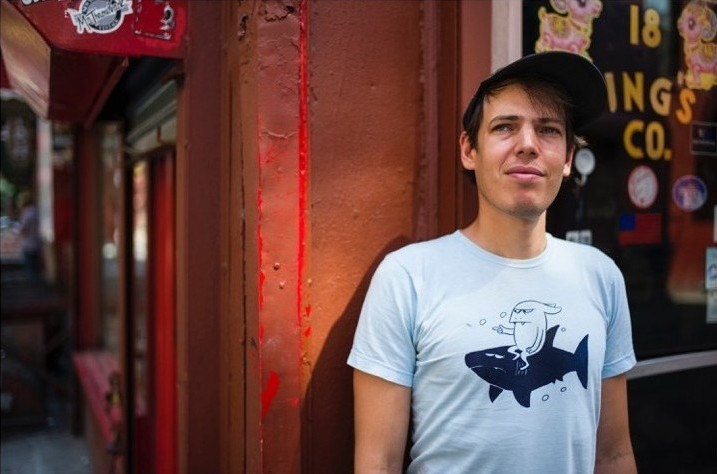 Manhattan is the seventh studio album from Jeffrey Lewis & Los Bolts for Rough Trade Records, and his first since 2011’s A Turn In The Dream-Songs. His band is called “Los Bolts” and includes his regular players Heather Wagner (drums) and bassist Caitlin Gray (Hooray For The Riff-Raff). The album’s artwork features Jeff’s illustrations throughout.

Manhattan was mixed by John Agnello (Dinosaur Jr., Phosphorescent, War On Drugs) and recorded by Brian Speaker. The album is both named after and directly inspired by New York City, but is no regionalized curio. It’s the very specificity of the details Lewis uses to depict his characters and situations that make his songs so evocative, and so emotionally rich. Lewis is both a lifelong resident and a detached observer of his hometown; but ultimately, it’s a simple treatment of human moments by one of our sharpest songwriting talents.

It’s a song that Jeff describes as “how empty life feels when you are in a relationship and that person’s not there, because you don’t remember how to have a relationship with yourself, you broke up with yourself when you started dating the other person.  You have to learn how to start dating yourself all over again.”

During the four-year gap between official studio albums, the Lower East Side Renaissance man played over 555 live shows (ranging from living rooms to Radio City Music Hall supporting Pulp); released a collaboration album with Peter Stampfel (of The Holy Modal Rounders), a three-song Pussy Riot inspired single entitled “WWPRD” and a self-released live in-studio album as “Jeffrey Lewis and the Jrams”; created and published both a series of zines in which he adapted Sonic Youth songs into sonnet form (naturally entitled Sonnet Youth) as well as two issues of his acclaimed comic Fuff. He has also illustrated several books and toured the US lecturing on the comic The Watchmen.

Le Poisson Rouge in New York will host Jeffrey Lewis’s art and music at a special release event in Manhattan on 27th October, with an opening for a visual art show in the venue’s gallery, featuring a career-ranging selection of Lewis’s illustrations and artworks, followed by a live band performance.