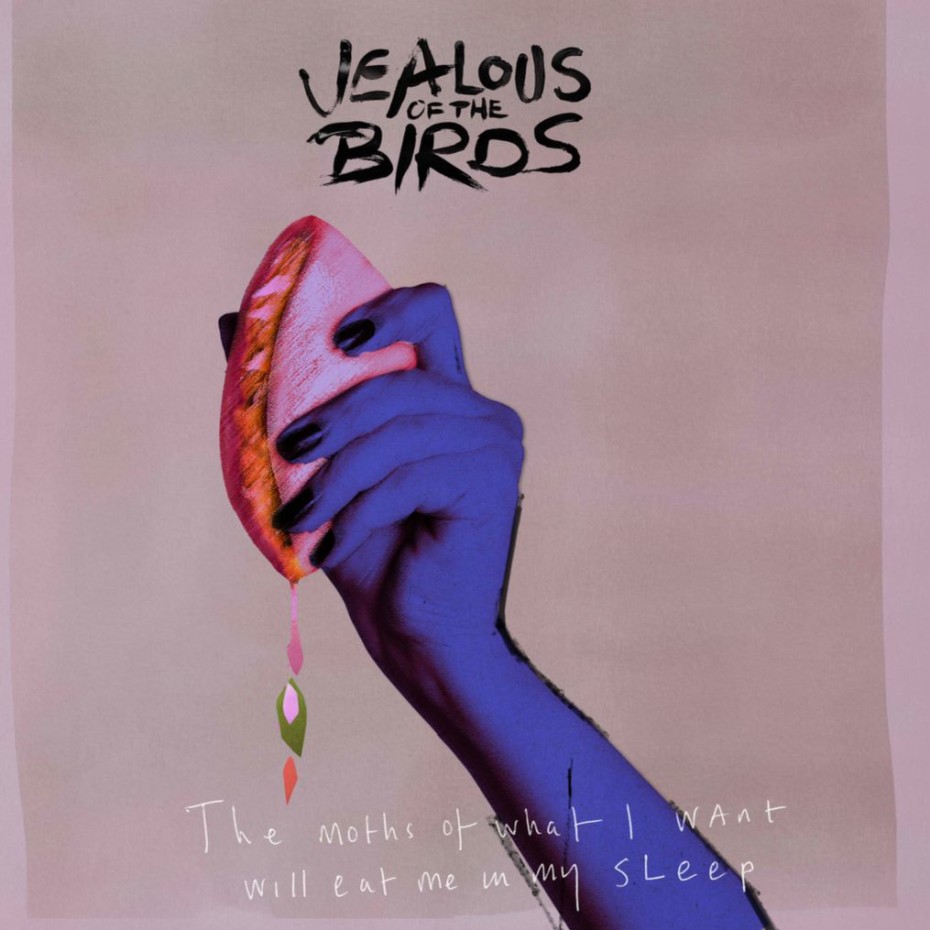 Jealous of the Birds

On Jealous of the Birds’ new EP, The Moths of What I Want Will Eat Me in My Sleep, Naomi Hamilton mostly reworks songs from her debut LP, 2016’s Parma Violets. The five-song EP leads off with its only new track, “Plastic Skeletons.” Jealous of the Birds EP will be available on July 13th via Canvasback/Hand in Hive

Hamilton comes from Northern Ireland where she graduated from Queen’s University with a degree in English and creative writing. Her literary influences appear in her song titles, like EP track “Tonight I Feel Like Kafka.” She also released a standalone single last year called “Mrs Dalloway,” named after one of Virginia Woolf’s best-known works, her 1925 novel of the same name. Emulating Woolf’s reoccurring water motif and much of her word-flow, “Miss Misanthrope,” another EP track, moves like a wave gently washing against and receding from a shore.

Every part of The Moths hums with life. From the rattling, hypnotic rock of “Plastic Skeletons,” Hamilton flutters to wayfaring folk on “Miss Misanthrope” and poppy, upbeat rock on “Trouble in Bohemia” and “Russian Doll.” The EP contains multiple detailed vignettes, often within the same song. Her lyrics are grounded in observations of the physical world, mostly of flora and fauna.

The differences between the LP and EP versions are often subtle. Handclaps replace tambourine on “Russian Doll,” for example. More notably, she wipes the thin layer of grunginess that originally covered songs like “Russian Doll” and “Trouble in Bohemia,” giving them a higher-fidelity explosiveness. Most vitally, though, the songs she has chosen to rework still represent her emotional extremes. She sings about being alone on “Miss Misanthrope” and “waking up sad” on “Trouble in Bohemia,” but the latter has enough fancy-free moments of berry-stained lips and being late to class to match the song’s rocking pep. “Russian Doll” shows the push-and-pull of the love-hate she feels: She seeks reassurance that she was her partner’s favourite person and says she will squeeze this person “like a lime” if they let her, but she also wants to punch this person in the face. Hamilton is as attuned to her thoughts and emotions as she is to her physical surroundings.

The Moths is vivid with the specific observations of someone who’s seeing something for the first time. But “Plastic Skeletons” in particular, which Hamilton wrote after her first trip to America, captures negative experiences. Here, she takes aim at corporate aspects of the music industry including ageism as it relates to the industry’s expectations of her as a young woman. (“Plastic skeletons” refers to props that decorated a SXSW garden party.) She describes Chicago, which she saw from a plane, as “rotting,” a contrast to Ireland’s green landscapes. This impression is refreshing compared to the more established trope of tourists being smitten by the glitz and glamour of America, but it can come off condescending. By releasing The Moths of What I Want Will Eat Me in My Sleep, Naomi Hamilton contradicts her own words: “You should know that everything I say won’t be repeated,” she sings on

“Plastic Skeletons.” But although there is little new on the EP for her fans to enjoy, it gives new listeners ample reason to go backwards and listen to her full-length debut.