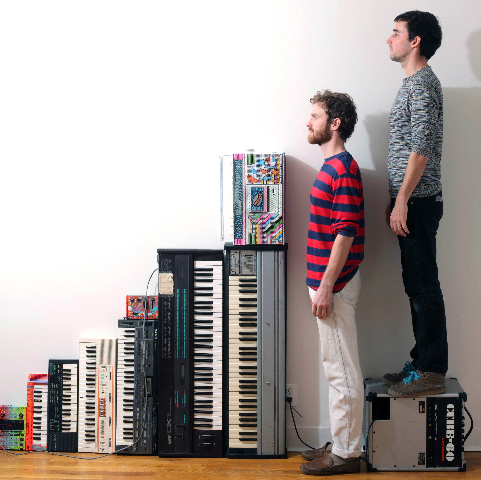 NY/LA genre-hopping duo Javelin has premiered the previously unreleased ‘The Marimba Song’  to celebrate the next leg of their spring tour, which takes them to NY’s Brooklyn Bowl with Jamaican Queens this Saturday, before they head out west for an LA performance at the Natural History Museum, and more. The Mariachi-gone-trap tune is infectiously danceable (or Twerk-able, ass-clap-able, booty bounce-able) is a perfect accompaniment to their sophomore LP, Hi Beams, (Luaka Bop).

Javelin, cousins George Langford and Tom Van Buskirck, recorded and mixed Hi Beams at Machine With Magnets (Pawtucket, RI) using proper microphones, a vintage mixing desk, an array of amplifiers, real plate reverb – in the traditional sense a “studio album.” Previous work had been cobbled together in home studios and mixed on computer. On this record, Javelin aimed for a sound they could not have achieved by themselves.

Hi Beams represents a more holistic approach to writing and recording than previously attempted by the band. The lyrics and vocal harmonies for the first time are foregrounded in decidedly songlike forms. The songs were made to be performed in concert rather than as a patchwork of fragmented glittery shards. They cover a broad range of territories: homage to the strangeness of being a performer; encountering beauty and the void in the natural world; light, sky, stars, moon; gravity, delivered with levity…

Hi Beams follows the duo’s 2011 western-inspired Canyon Candy EP,  No Más LP in 2010, and their 2009 self-released debut Jamz n Jemz. Javelin has played shows and toured with Yeasayer, Sleigh Bells, Future Islands, Matt & Kim, Warpaint, Major Lazer, performed at Lollapalooza and The Whitney Museum, as well as parties across the US, Europe, and South America. In this time the duo has become an in-demand production and remixing team, working with everyone from Neon Indian and Lucky Dragons, to G-Side and Tom Ze.