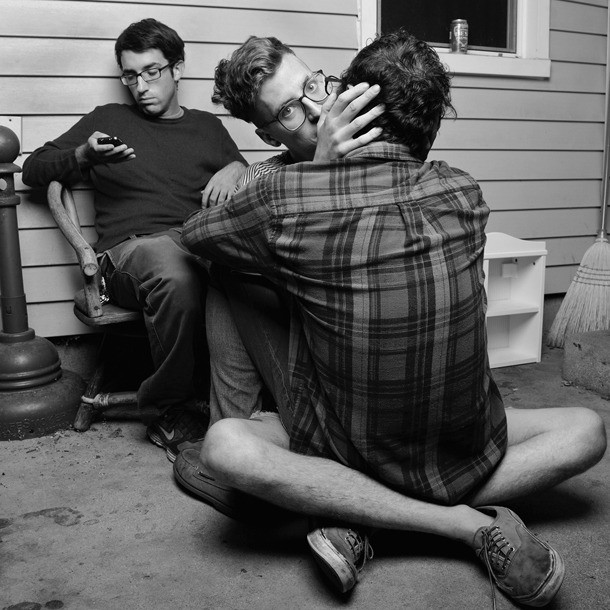 TwitterPinterestPocketRedditFacebookEmail
Detroit duo Jamaican Queens has debuted a brand new video for their single ‘Caitlin’ with Nowness, and are excited to announce their first ever West Coast tour dates. The video for the single, aken from their acclaimed debut, Wormfood on Notown, utilizes innovative green-screen techniques and colorful animation. The song was written by Ryan Spencer as a Secret Santa gift to comfort a friend, Caitlin, who had recently suffered a tremendous loss. For the video, the band collaborated with Dan Demaggio, another Detroit native, who spent a month creating the animations for the video. After performing at SXSW, touring with the likes of Javelin and Dustin Wong, and sharing videos for ‘Caitlin,’ ‘Water,’ and ‘Kids Get Away,’ the band has many causes to celebrate. So, what better way to celebrate than a tremendous homecoming record release show and west coast debut? The band will play Detroit’s Trinosophes this Friday, April 12th and briefly return to the New York area before embarking on their west coast dates.

The partnership of Jamaican Queens’ Ryan Spencer and producer Adam Pressley was conceived in late 2011. Pressley moved to Detroit to join Spencer in his former band Prussia, and shortly after his arrival the group dissolved. The two decided they worked better as a pair and spent that winter writing and recording Wormfood, which was mixed by High Bias Recordings engineer, Christopher Lazlo Koltay (Akron/Family, Dirtbombs). The fusion of Spencer’s melodies and Pressley’s knowledge of underground music and production gave birth to their unique “odd pop” or as it’s being called, “trap-pop.” Influenced by the southern rap beats of Three 6 Mafia, Gucci Mane, and Young Jeezy, as well as the experimentation of Brian Eno and Lee Scratch Perry, Wormfood draws from electronic, dub, downbeat, and folk influences, creating an erratic canvas overlaid with radiant pop hooks.