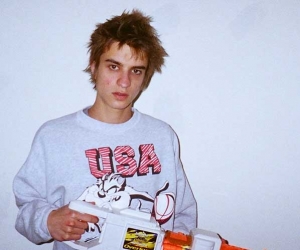 The video for Jackson Scott’s “That Awful Sound” is a coming-of-age piece involving a young man familiarizing himself with some of the harsher realities of life: aging, violence, sex, human neglect, death, etc. told in a surreal fashion. It’s the first ever music video from Scott and was directed by nautico. Jackson Scott launched a tour with Gauntlet Hair last night in DC and will continue touring into the Fall with Unknown Mortal Orchestra – see full list of dates below.

Jackson Scott has developed out of a weird audacity; bending spoons with apocalyptic melodies, sugared with solipsistic textures. How did the world conceive this young cosmonaut? A college dropout with a 4-track and a one-track mind. A listener and a conceiver. His voice, whether pitched up or androgynous, speaks of a still life. But painting is meaningless, songs irrelevant, aura outdated if you are a revivalist. Jackson is not.

The recently released debut Melbourne shows we’re all alone together, sharing the same tragedies, ecstasies and phenomenon. He conspired it out of isolation, deprivation and hunger…you can’t survive on candy alone.