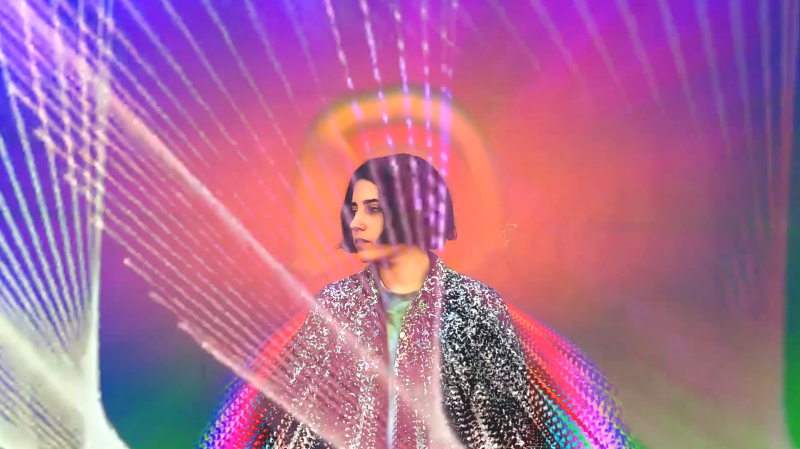 Jackie Mendoza has released her new single/video, “Mucho Más,” the track is off her forth, LuvHz, out April 26th via Luminelle Recordings. The lyrics were written while Mendoza was too anxious to leave her apartment and the instrumentation was later fleshed out with frequent collaborator Rusty Santos (Panda Bear’s Buoys). “Hidden reasons and lost causes, what’s a mystery now will make sense eventually,” says Mendoza. The singer/songwriter will be playing a run of dates, including a handful with Diane Coffee, starting April 11th in Philadelphia.

The “LuvHz” (“Love Hurts”) EP is a six-track exploration of love and relationships. “The title of the EP (‘LuvHz’) encapsulates all types of love and the hurt than can come with it: love in relationships, love for the environment, and love for one’s culture.”

Born and raised in the border city of Chula Vista, California, Mendoza blends the cultural influences of her hometown and her motherland of Tijuana, Mexico, creating eccentric electronic pop, Latin-driven dance beats and vibrant soundscapes. She’s been involved in music since she was young, listening to Latin-pop songs at family parties, and playing in bands in high school, but it wasn’t until she took a course for Ableton in college that she discovered an avid interest in producing and making beats. Since then, she’s been experimenting with electronic ukulele-based pop, expanding the instrument’s sound to its maximum potential by layering it with beats while singing in both English and Spanish.