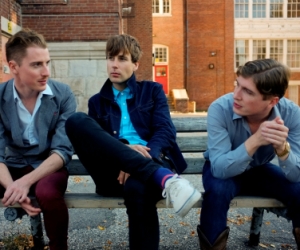 With the release of their latest record on the horizon, Islands is excited to reveal their latest single, “Becoming the Gunship.” Drawn from the band’s upcoming record, Ski Mask (Sept. 17th – Manque Music), the track’s genesis is rooted in a dream of lead singer Nick Thorburn’s. “The first three lines in the song — ‘When it was dark / I was a question mark / Becoming the gunship’ — came to me in a dream,” Thorburn says. “I woke up and immediately wrote it down and held onto the piece of paper until I could flesh out its hidden meaning into a full song.” Listen to the track above.

The band will also be heading out for dates in North America this fall, with stops including Boston, Portland, Toronto, Los Angeles and New York. Full tour dates below.

“This record is really about being angry,” says Thorburn. “For better or worse, this record kind of sums up my experience thus far with being in a band. Like the third act of a movie—just after it seems like all hope is lost, that’s when the big breakthrough moment happens. For Islands, this is us waiting for the breakthrough moment.”

Thorburn, along with a rotating cast of bandmates, has been working under the moniker of Islands for nearly a decade. Formed in 2005 after the dissolution of Thorburn’s previous (and much beloved) band The Unicorns, Islands quickly established themselves as one of the most erudite and forward-thinking pop bands to emerge from the Montreal rock scene. Over the course of four albums — 2006’s Return to the Sea (inspired by South African high life music), 2008’s Arm’s Way (a study in orchestral pop music and playful psych), 2009’s Vapours (pulsing electro pop), and 2012’s A Sleep & A Forgetting (soulful singer/songwriter fare)—Thorburn and co. showed off a remarkably chameleonic ability to bend a variety of different musical styles to their will. With Ski Mask, Islands has synthesized their diverse musical tastes into one concise whole.