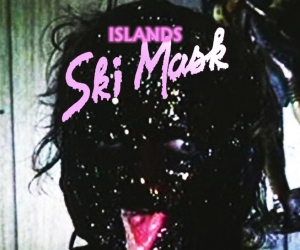 Last week, Islands released their fifth record Ski Mask on lead singer Nick Thorburn’s own label Manqué Music. Just one week out and the band is already being profiled in one of the most respected rock n’ roll documentary programs in the World. Produced by Michael Cera for the YouTube network JASH (Sarah Silverman, Michael Cera, Tim and Eric, and Reggie Watts’), the video is an intimate look at the making of Ski Mask and features interviews with the movers, shakers and power players behind the band. Watch the short documentary above.

Islands is currently on an expansive North American tour this fall, with stops including Boston, Portland, Toronto, Los Angeles and New York. Full tour dates above.

A record that is equal parts beauty and venom, Ski Mask percolates with the kind of polymorphous pop and hooky, left-of-center rock songs that have long been the band’s stock and trade. Arguably the most sonically diverse album Islands has ever made (which is saying something), Ski Mask plays out like Thorburn’s personal frustrations writ large. Songs like “Death Drive” “Nil” and “Of Corpse” balance beautiful melodies against some of the darkest lyrical missives that Thorburn has ever written.