IO Echo To Tour With Haim This Fall 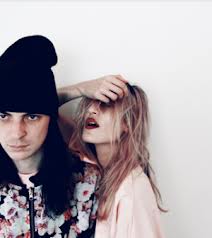 Riding high on the wave of their pastel doom, LA industrial pop duo IO ECHO are gearing up for their fifth tour of 2013, now alongside fellow Angelenos and longtime comrades Haim. The pair of Leopold Ross and Ioanna Gika is poised to segue the momentum from their recent Lollapalooza appearance into another string of celebrated nights of live material from their debut LP, Ministry of Love, released last April via IAMSOUND.

Enrobed in the flickering glow of dimmed strobe light, IO ECHO claims the stage with an arresting aural and visual style that enmeshes East and West. Front woman Ioanna Gika draws from youth spent in Asia as she and Ross meld Koto and Chinese Violin into the band’s orchestration and adorn sets with Sensu fans and painted screens. IO ECHO’s singular aesthetic has garnered adoration from the fashion and arts communities, most recently culminating in a feature within the pages of the September issue of Vogue. Ioanna has also been recently selected as the face of Henry Holland‘s eyewear line, as well as gifted a custom designed kimono from Jeremy Scott.

No strangers to the road, IO ECHO have toured with the likes of Garbage, Bloc Party, The Joy Formidable and CSS, split billings with No Doubt, Nine Inch Nails and Salt N Pepa, and have mesmerized masses at Coachella, South by Southwest, and Lollapalooza. The tour kicks off September 1st in Boston at the Paradise Rock Club.