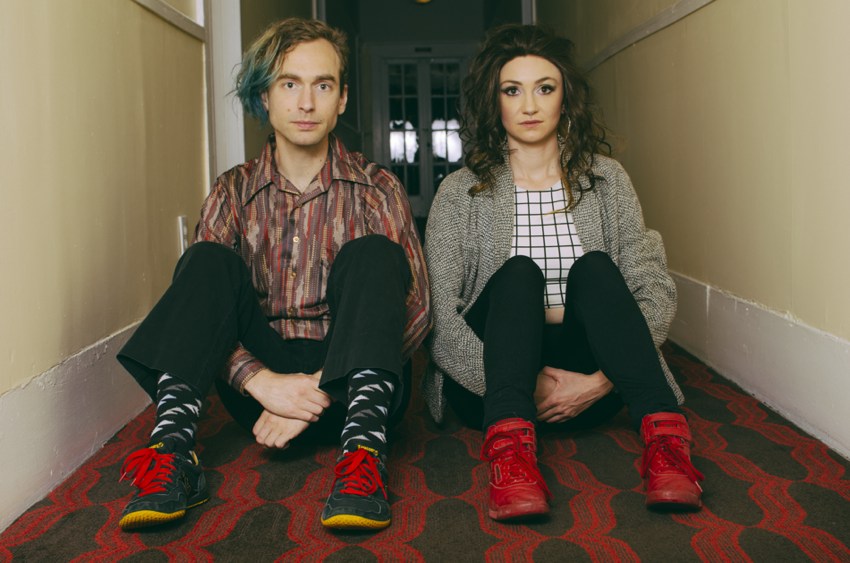 Based in Oakland, California, Introflirt is a trio comprised of Vafa, Ben Benjamin, and Brendan Dreaper. “Introflirt is a soundtrack for the insecure”. But isn’t awkwardness an obstacle? No, says Introflirt. It’s an advantage. The Oakland-based group’s approach to creation and performance is informed by an unease with social interaction and the struggle to form a self-actualizing view of personality. Thriving on making this internal experience public, Introflirt invites listeners to embrace the freedom that being comfortable with awkwardness allows. With Introflirt, being an outsider means being an insider.

And the group makes no effort to fit in to any established social circle. With their suspenders and jumpsuits, Introflirt’s retro charm isn’t just a passive aesthetic choice. The term “retro,” as applied to synth pop, typically references the 80s. But Introflirt takes “retro” back to the 40s and 50s. Their self-described “croonwave” style is a result of founder & singer Ben Benjamin spending countless weekends in an Oakland piano bar, honing his chops with mid-century jazz standards, realizing a vintage flair and a vocal technique rarely heard in electronic music. Apply that to dark, shifty-eyed beats and swirling synth riffs – performed by Vafa Donorous – and you get croonwave.

Synthpop new wave artists Introflirt shall release their second album Temporary Heaven on August 12 after dropping two singles “Frozen Lace” and “Orange Light”. This album represents the next stage of evolution in their self-described “croonwave” music. True to Introflirt form, the songs on ‘Temporary Heaven’ maintain a delicate balance, offering the soundtrack to a life that is introverted while still reaching out.