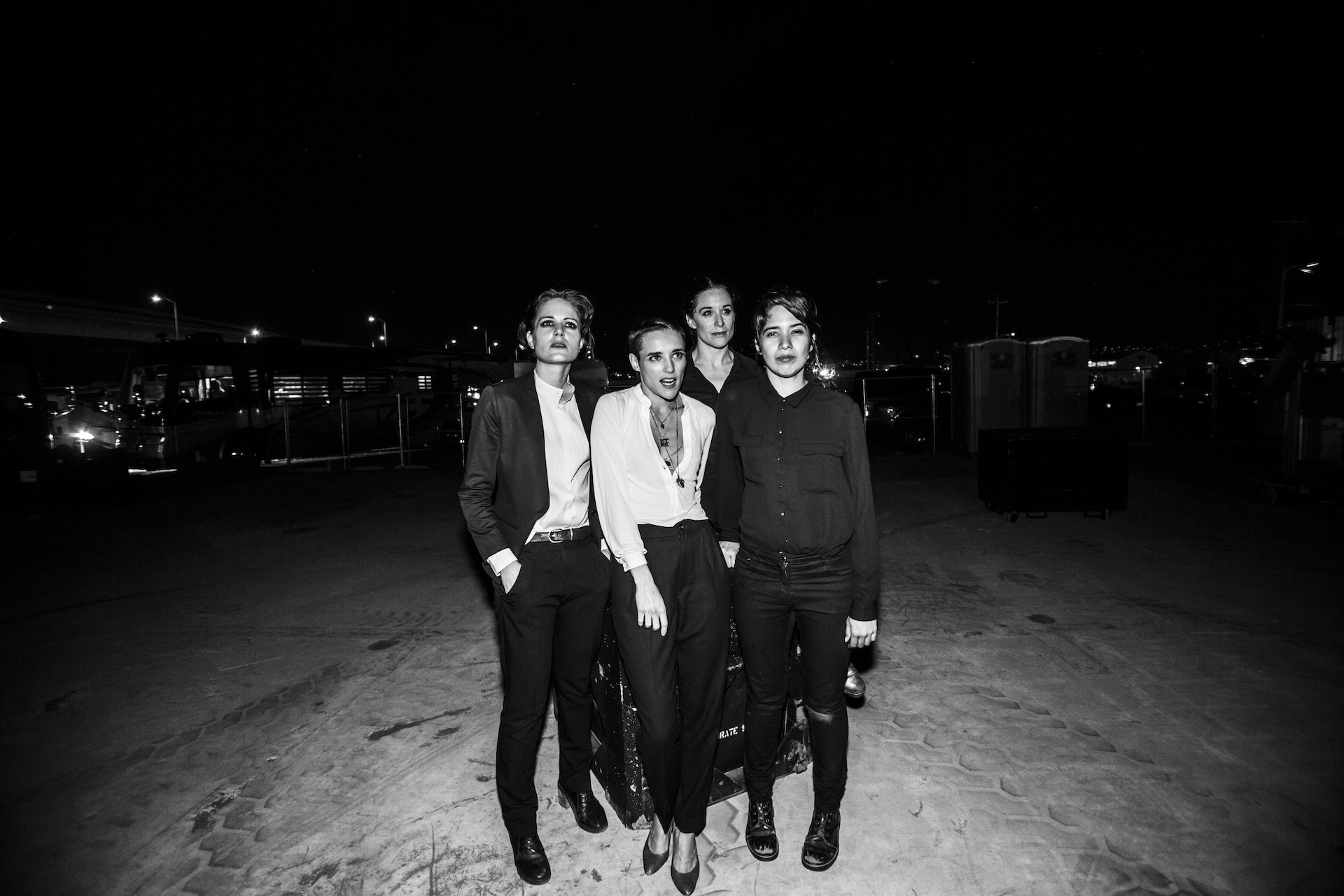 “Is it human to adore life?” Jehnny Beth ponders on “Adore,” the fourth track London post-punk outfit Savages sophomore release Adore Life. The album, out Jan. 22 on Matador Records, teeters back and forth between hopeful optimism and realizations that humans are pained and nuanced beings all the while marked by searing and angular instrumentation. Creeping basslines from Ayse Hassan, wailing riffs courtesy of guitarist Gemma Thompson and pulverizing drumming via Fay Milton expertly nestle with Beth’s howling vocals, a pure, sobering and refreshing take on the rock genre. It makes you think. It forces you to feel.

“The record focuses quite heavily on love and the light and the dark and the bigger and the bad parts of love,” bassist Ayse Hassan said. “So for us to be able to talk about such a topic, we felt we needed a lot of contrast to reflect that. To reflect that you might be in love, but it might not necessarily be the love that you want, or it might be the saddest moment, but also the happiest.”

Following in the footsteps of the band’s debut Silence Yourself, released in 2013, Savages ignite an intense spark with post-punk fervor that incites both inner reflection and even some dancing.

This time around, they paced themselves, worked through the album slowly. They experimented. They took the songs to New York early this year to try them out in a live setting, workshopping what would eventually be Adore Life in front of a sea of fans. Hassan checks in with us to discuss the intricacies of the album and their recent show in Paris.

Northern Transmissions: What went into the writing and conception of Adore Life?

Ayse Hassan: Adore Life is a record that we wrote in a completely opposite way to Silence Yourself. Silence Yourself was at that moment and a snapshot of us after a year of being on the road with what we do live. So we wanted to basically take a sonic photograph of what we were at that point. But because we’d spent another year or so touring and playing those songs, we decided we wanted to approach the second record in a very different way. We wanted more time. We wanted there to be more production. We kind of recorded live [on Silence Yourself] so a lot of the songs were us in the studio playing together. For Adore Life we wanted to separate the instruments and to record the instruments separately which is great. It was an interesting process for us because we got to observe each other recording each part of the songs separately, so it really boils down into what each person does in that song and the sounds that are taking place and the energy from each instrument.

With Adore Life we also wanted more time to actually gear down into the things we wanted to achieve, such as particular sounds we might’ve wanted to find. In one of the weeks of recording, Gemma had a week to go through and explore different sounds that she was trying to find for certain songs. I remember going to RAK Studios and I could feel the basement shaking because she was trying out some amps and pedals. It was such an amazing experience. It felt like some crazy thunderstorm.

This record came out of us being on the road together and learning how to be with each other over the last three years and responding to the attention we’d received on the road from fans. Instead of being insular, to protect ourselves as a unit—which we needed to be for the first record—I feel like we’ve kind of opened up. We wanted to contrast what the lyrics were saying, musically. For example, you might have a poetic sentiment, but underneath you might have a really heavy, distorted bass sound which short of contrasts or contradicts what’s being said.

NT: I like how you mentioned the whole contrast thing. You can have these beautiful lines about life and love and optimism and underneath it’s very heavy or distorted. It’s an interesting dynamic to have on this album.

AH: It was us exploring what love is and the fact that it can exist, that there might be other emotions that can are connected to it. You can say love is connected to life, to death. It sounds so dramatic but it’s part of being human. For us, mechanically, we needed to respond to lyrics in that way so we could talk about that subject matter in the way that Savages would.

NT: It’s like one of the lines on “The Answer”: “Love is the answer.” Do you think people need to think more in that way?

AH: With these songs, people can find their own meaning in the subject matter and the lyrics. For me personally, I think sometimes love can be the answer. I think it’s for each individual to find their way through what it is they’re going through. And sometimes love can be the answer. It may not be the answer to everything, but it’s something that can make things a lot nicer. To react and care for one another, to be respectful and to be honest. This record it feels like a very mushy record—in many ways its about love and life.

NT: It is very straightforward in that way, too. There’s no beating around the bush, this was the message that you were going for. Was that intentional?

AH: Everything we do is intentional and we’ve always wanted to be a band that was direct and we get to the point. We don’t have anything that isn’t a necessity. It’s an essential thing for us.

NT: I like how you have songs like “The Answer” and also “Sad Person” which is the other end of the spectrum.

AH: Again, it’s that contrast. Dare I say it’s a huge contradiction, but I think life is a contradiction. If you experience things throughout your life, it isn’t always clear-cut. This record is an echo of that.

NT: Even the album art is pretty powerful, too. What went into choosing that?

AH: There were so many reasons. Again, the contrast. It’s such a strong image: a fist. I think for many people, that image will evoke a different feeling depending on their life experiences and the imagery they’ve seen throughout their life. The idea to adore life, sometimes you just have to push on through.

NT: I like how you said the meaning is different for each person. Do you feel that way whenever you listen to the album? The way you perceive a song is different than someone in the band or an audience member?

AH: Absolutely. How you respond to a song or a title, it can evoke different things depending on your life experiences. We always drill down into what’s being said because, obviously the lyrics are representative of us as a band. Jehnny always goes through the lyrics and explains what it means to her. From that, we give our own impression of what it means to each one of us. That’s very special because we all need to be involved. We’re all in a position where we’re making music that we want to make. I don’t think any of us would do this if it didn’t represent what we are as musicians, as people. I think that’s an essential part to us making music together.

NT: Have you ever been able to go back to your own music and find new meanings?

AH: Yeah! There’s a contrast in, for example, a song like “Sad Person.” I remember we had a discussion with Jehnny about what that title meant to us. In the U.K., a sad person has a different meaning to us than it did to her. In the end, that’s quite interesting: the fact that how she sees a sad person is different. I like that it’s almost like a really poetic lost in translation title.

NT: That’s awesome because no matter where you are in the world or what you’re going through in life, everybody is going to interpret something slightly different.

AH: Absolutely, and that’s what’s so beautiful about it, you can get attached. There have been many moments in my life, there have been certain records I have found that have given me the strength to get through something or pushed me to do something a bit different. I doubt that the artist that created that record ever thought that would happen because it probably meant something entirely different to them, but to me I took what I took from it. I’m always interested to see how people respond to the tracks and what they take from it.

NT: I think people will take a lot out of this album. It’s a really dynamic album and it says a lot.

AH: I do hope so. On the most simplest level, I hope that people just want to lose themselves and dance to the music. I feel a lot of songs are very dance-y and the other girls are like, “Wow, you see it like that?” I listen out for slightly different things, being a bass player, for me, something that resonates is what the drums are doing. The drums are the heartbeat of a lot of the songs and it makes me want to move and immerse myself in such a beautiful tone.

NT: I think that plays into the live experience you offer as well.

AH: I hope it will always be that way. For us, being on stage is one of the rare moments where we can be totally free. To experiment, to explore, to have a voice. For the audience to enjoy themselves and immerse themselves in that moment. That moment we’re experiencing is this thing that will be, hopefully, a memory for everyone who wants to come. For us, when we play a show, we think of the show as an event so it’s an experience as soon as you walk in the door. We want people to realize how much we’ve put into and how much we care about the experience that they’re going to have. So the moment you walk through the door, you’re going to hear a soundtrack that one of us has created based on our environment, the location of the venue, the vibe. You’ll definitely see a support band that is a band that we’ve chosen and love or there’s some sort of a connection with in some way.

NT: With that said, you guys played in Paris recently. Were you feeling all of those sentiments but turned up a notch?

AH: That was a very special show for us. We decided that we would play the show because there was a moment where we took into consideration “Is this the right thing to do?” We did an Eagles of Death Metal cover—we thought it’d be good to. I remember looking at Fay and I could see that she was very upset—we all were—but to be there in that moment, it was a really powerful moment for everyone. It was very intense and in some ways, scary. I think everyone was nervous, but it was something we had to do.

NT: There’s something beautiful that comes from it. You can move on and take it to a more positive place through music.

AH: That’s the hope. When we played, we were sharing a moment with people that were going through a lot. That’s a massive understatement.

NT: Love is the answer, that’s what it goes back to.

AH: Yeah, and the compassion the people have for each other. In that moment, it was a strong community of people that cared about each other.