Interview with Jordi From San Cisco 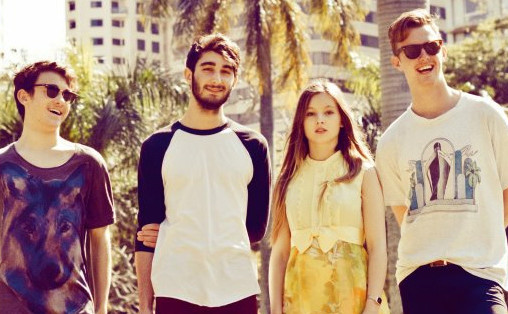 We caught up with Jordi Davieson from ‘San Cisco’ while on a tour stop in Chicago. The Australian band is on a tour of North America, then off to Europe for additional dates. Their EP ‘Awkward’ is out now on Fat Possum.

NT: You’ve described your musical vibe as “Squelchy and Hairy”, can you tell us a bit more about this description?

JD: It’s really hard to describe the sound of our music, or our genre. We were talking with someone in New York City about that, it was kind of weird situation, I really couldn’t come up with a description. I think we just decided, let’s call it hairy and squelchy, that’s all we could think of. Somehow the label has kind of stuck.

NT: How has touring been in North America compared to Australia, I’ve been told their are some pretty big differences.

JD: Ya, we hit some major snow storms, that was pretty interesting (lol). We don’t get anything like that back home. The whole thing was pretty new to us. In Australia you fly everywhere, the geography is so spread out, it makes no sense to drive anywhere. There are no Sprinters or Tour Busses in Australia. Actually, I think there are a couple of busses, but hardly any. We love touring in North America, the catering and hospitality has been great. I gotta say we love the folks at ‘The Corner’ in Melbourne though, they really are great.

NT: The band has already played some pretty impressive gigs, including ‘Big Day Out’ and ‘Laneway’ in Australia. How does it feel to be playing shows like these so early in your career?

JD: It’s been really cool, a great experience. We have had a great time playing the Festivals, we feel really lucky to have had these opportunities so far. You also learn quite a bit playing to larger crowds. The Laneway festival was a one-off, but there was something about it that we really enjoyed.

NT: Tell us a bit how you ended up working with ‘Fat Possum’, (The first Australian band to be signed to the label), I believe you work with RCA as well. How is that going?

JD: It was kind of cool the way the whole thing came together. Current FM in Minneapolis has really been playing us quite a bit, really supportive of our music. Matt Johnson from Fat Possum happened to be listening, I guess he really liked what he heard. He really wanted to sign us, which was really great. So Fat Possum puts our music out in North America, while RCA handles all the publishing and marketing stuff.

JD: Yes definitely, I mean our audience is the generation that is very involved in social media. It’s interesting when something becomes popular it can take off pretty quickly these days. Were lucky that so far, younger people have embraced our music. They really have an impact on all media these days.

NT: Can you tell me five albums that people should listen to?