Interview with Jay Watson from Gum 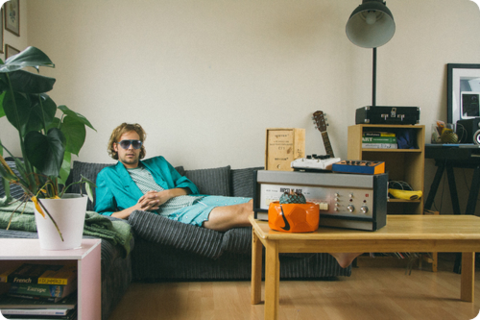 It seems Jay Watson doesn’t know how to stay still. When not enjoying a successful life touring the world with Tame Impala, you can find Watson on tour or recording with Australian psych-rock band Pond. In between all that activity, Jay Watson somehow finds time to record and produce music of his own under the moniker GUM. With three albums in the last three years, GUM just released their new album “Flash In The Pan” which finds Watson playing all the instruments and self-producing. We reached Watson on tour with Pond at Melbourne’s Gizzfest.

Northern Transmissions: You’ve just released your third albums in the last three years. How do you find time to write and record these GUM albums with all the Tame Impala and Pond work?

Jay Watson: I guess it’s because I don’t work on them for that long, it’s a very casual recording and release process where I can just put them out whenever I want. The only downside is that people often listen to GUM albums or review them in caparison to the Tame Impala and Pond stuff, when I’ve kind of just made this album in my room over a few months and put it out.

NT: Would you say it’s more of a passion project without huge expectations?

JW: I do have expectations, but GUM is not as properly released as the other bands. For me it’s just exciting as a recording project. I think for the next one I’ll record it in a proper studio for a first time, but I really like recording and mixing it myself to try and get better as a producer.

NT: Sounds like you already have plans for a fourth album.

JW: I’m lucky enough that I don’t have to have a regular job because of Tame Impala. When I’m not touring I don’t want to just sit down and play video games, so I kind of have lots of free time to write music and do it to pass the time.

NT: Tame Impala is one of the busiest bands, touring for practically all of 2015 and 2016 non-stop. How much of what you’ve seen and experienced travelling the world over that time influenced your lyrics on this record?

JW: Yeah there are always experiences that come through. I think my GUM stuff often has some weirdness to it, probably just from touring for 10 years with both of the bands. I’ll have a gap between Tame Impala tours and then there’s a Pond tour, but I don’t like writing about sad things or homesickness.

NT: Have you lost all sense of normal from being on the road so much?

JW: The lifestyle of touring, sometimes being homeless, sometimes staying at a friend’s place has now become normal. I think Australia is so far away from everywhere that you realize you have to go quite far to get anywhere. I lived in London the last few years which made touring easy because from there it’s short flights to the US and rest of Europe. But for first five years of touring, it was Perth to London or Perth to New York, which is pretty much as bad as it gets with 30 hour flights.

NT: What do you see as your biggest development artistically from the first GUM album to Flash In The Pan?

JW: I think the sound and the production. With GUM I’ve often put most of my effort into the recording and mixing. GUM is more of a mixing exercise for me. That doesn’t sound too inspiring for songwriting, but I basically use it as a way to get better at making music for other projects. I really think I’ve evolved over the three albums in my production and mixing. For the next album I might get someone to mix and record for me so that I can try focusing on songwriting for a first time and the arrangements, while for the first three albums I’ve just been focused on studio recording technology.

NT: Your first single is called “Gemini”, and you are a Gemini, do you put a lot of faith into horoscope/zodiac signs?

JW: No, I don’t believe in that at all! It’s kind of sarcastic. I think the dates moved anyway and changed for that stuff, right? So people’s horoscopes are all based on the wrong days anyway. I’m a bit worried that everyone thinks I care about that stuff by calling the song Gemini.

NT: Aside from Gemini, are there any specific songs from the album that you’re really excited for people to hear?

JW: I really like the last song, the ballad one, “Distorted Star”, but once I put the albums out I sort of move on to the next thing. I do like the album. but I don’t like to dwell or else I focus on the things that I could have done better. I find it hard to enjoy the things that I’ve done well, I tend to focus more on the negative, so I move on as soon as it comes out.

NT: Do you find yourself more comfortable as the sideman to Kevin Parker in Tame Impala, or as the sole focus in GUM?

JW: Probably somewhere in between that, which is probably Pond. With Pond I’m not the sole boss, but I’m one of many bosses. All of us make the decisions together and that’s what I like the most. I prefer not having to do it all myself, but also not having to be a straight sideman.

NT: Any Pond plans to tour North America or Europe after this Australia tour?

JW: We’ll be in the United States and Canada around April, and a new album will be out by then too. Right now we’re playing two songs from the new album, but by the time we come there we’ll probably be playing most of the new album live.

NT: What can fans expect from the new album? Anything different from past Pond records?

JW: Yeah it’s quite different. On this album we tried out some different instrumentation which is cool, it’s the first time we’re using horns and strings. I think people will like it; I mean if I were a Pond fan I would really like it. It would probably be our favourite album too, I’m really proud of it.

NT: Anything new coming up in the world of Tame Impala?

JW: We’re playing the Laneway Festival next year in Australia, but we haven’t really toured for a while. I think Kevin [Parker] is busy working on other people’s albums right now. We kind of needed a break I think, we’ve been touring for eight years straight, but now GUM is helping me play some new music with this free time.