Interview with Hamilton and Rostam 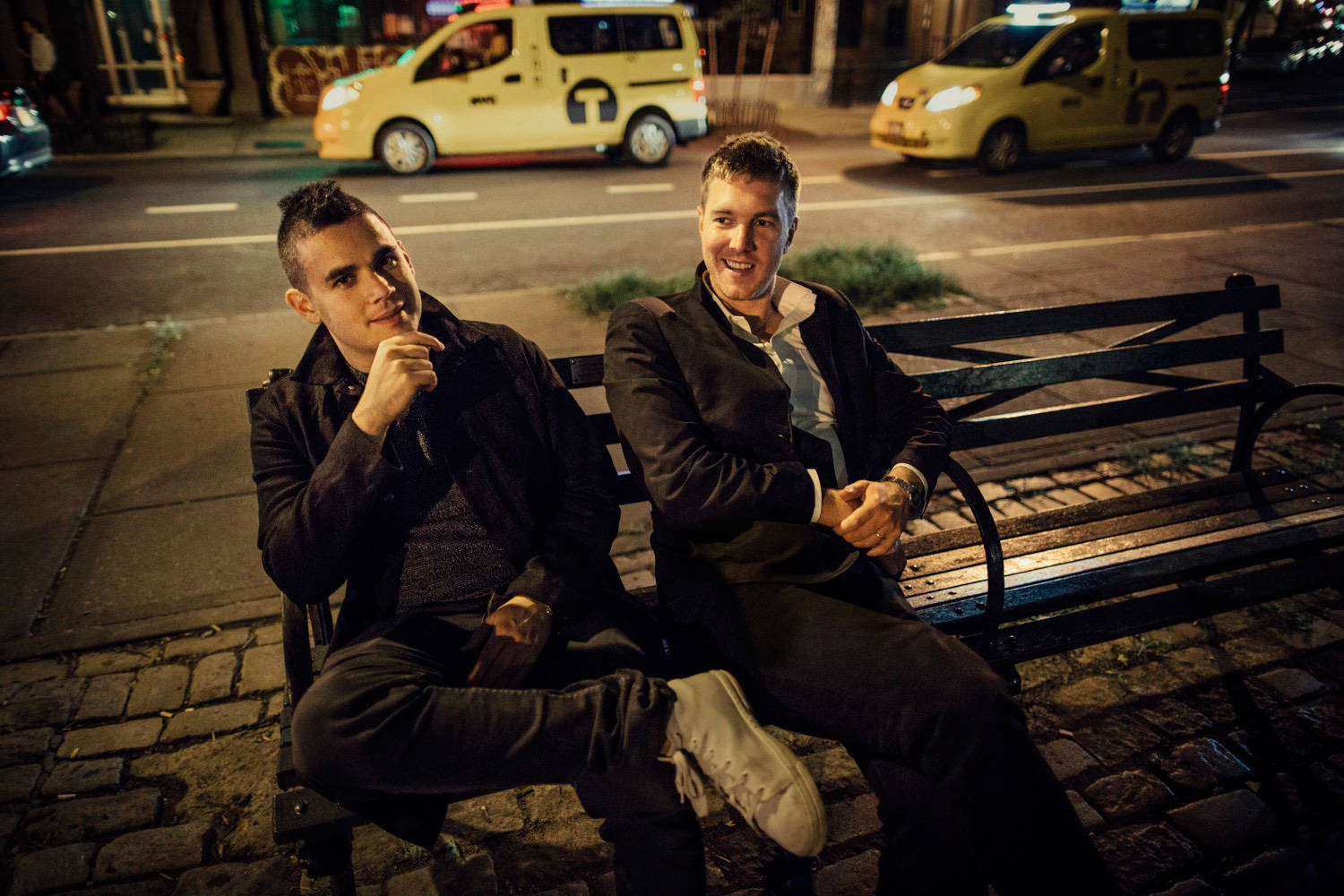 I wouldn’t think of drinking seltzer and cranberry juice while listening to Hamilton and Rostam’s album, but I get why it would be a good complement. I Had a Dream That You Were Mine is a versatile record that appeals to people at different genres through simple melody and Hamilton Leithauser’s craving vocals. It is bubbly and youthful, not unlike the beloved seltzer and cranberry juice that Leithauser would suggest paired with it.

Almost two years in the making, I Had a Dream That You Were Mine by Hamilton and Rostam, is the first equal collaboration between Hamilton Leithauser (Walkmen) and Rostam Batmanglij (Vampire Weekend). It releases September 23.

Northern Transmissions interviewed Leithauser on being a band with Rostam, recording with ‘life,’ and the uncomfortable role of musician as promotor.

Northern Transmissions: Rostam was a collaborator on your solo album, Black Hours, but this is your first equal collaboration, and you have kept your own names. Some artists find empowerment through adopting different stage names. How do you feel using actual names for I Had a Dream That You Were Mine?

Hamilton Leithauser: Well we both came from bands. I did a solo record under my name because I have been in nothing but bands my whole life, and really wanted to do something under a name that was just mine. Once I started that, I didn’t want to just abandon it to start a new band. Neither did Rostam. Even though it is a little lopsided and hard to say, we just thought it was the most honest approach of who made this record. [Rostam and I] both have careers outside of the other guy. I have a band that I tour with a lot, and he produces other peoples’ music. But we worked together on this, and I’m sure we’ll work together in the future.

NT: You and Rostam have your own careers, but you share similar musical trajectories with Walkmen and Vampire Weekend, and you are also both from Washington, D.C..

HM: Yeah, it’s funny. There are so many similarities. I saw [Rostam] many times over the years, but I only really got to know him in 2012. The first time we sat down and really talked, [we realized] we had so many mutual acquaintances.

NT: How is having Rostam produce this album different from your work with previous producers? Do you feel as if your connection as friends has made this collaboration more intuitive?

HM: To me, it is like we are band members together. That’s my understanding. In the past when the Walkmen worked with producers — which was very far and few between, considering how many records we put out — we only worked with maybe four producers on a few songs. The band was there, and the producer was this other guy. An outsider. Usually [the producer] would bring something, like technical know-how or some kind of structural idea for a song. But this time was much more like, we are the band. Rostam is a band member. We are friends, and we also wrote the songs together. In my experience, that’s what it’s like to be in a band with somebody. The term ‘producer’ for Rostam is very loose.

NT: Speaking to the production, the sound of I Had a Dream That You Were Mine has a laid-back, live performance quality to it. Your vocals are especially emphasized. What was the motivation behind the stripped-down sound?

HM: Well we didn’t want to make an acoustic record. We wanted to make a full band record, but it was just the two of us, so it was really important to capture as much live sound as we possibly could. We had to [record sounds] basically one at a time because we didn’t have a band. That was just the process. In my experience, if you bring five people [into the studio] playing a great new song and you get it sounding really tight with a full band, that’s where the life comes into the recording. But here, how [Rostam and I] got the life is that we kept a lot of the first takes and most exciting moments from the actual writing process. We kept those, and put them into the recording. That made for a less polished sound. [The result] is just more fun. It’s just what we want to listen to.

NT: Your new record was recorded between July 2014 and February 2016. I know that you are Brooklyn-based and Rostam is L.A.-based, so how much of this album was conceived in person, and how much remotely?

HL: Actually, there was very little remote work. [Rostam and I] would just take time off. It took a long time to finish the record, but the total amount of days we were together was not much considering how much we did. There were probably 10 trips, four to eight days long, and that was the whole record. We would work hard when we were together, and then we would just step back. We didn’t email back and forth ideas. For “In A Blackout,” the final version that’s on the record is almost exactly what we recorded that day, including the mixing and mastering. I’m so happy we didn’t get bogged down trying to perfect some parts or something.

NT: Our previous interview date was cancelled for an appearance on Colbert, which is cool. Television appearances are important for promotion. I wonder, are you comfortable with the way musicians today have to market themselves on visual platforms and through social media?

HL: I haven’t fully accepted it, no, to be perfectly honest. For instance, when I was younger, [my band] always had trouble with the idea of making a video for our songs. We spent all our time making the song, and suddenly there is a lot of pressure to make a video. From our band’s perspective, we were not video people— We make the record, and that’s what we do. We didn’t really want to make this promotional tool into some sort of art project because to us, it’s wasn’t. That’s where we stood for many years. To be honest, these days, I don’t have much of a vision for videos. If I see something that I like, I am impressed by it. When [Rostam and I] did the “1000 Times” video — and I give Rostam credit for the concept behind it, though I had some ideas too — I ended up loving the video. I love the way it turned out, and having it be connected to our song.

With Twitter and Facebook, I’m a little too old for that. I used to walk around East Village and put up flyers. I would duct tape them to signs. When I lived in Boston I would take The T, get off at a stop, go to Kinkos and make a thousand flyers, and hand them out to people on the street who would just drop it in front of me. It was pretty humiliating stuff. So promoting myself on Twitter or Facebook or whatever, I’m fine with that, but it isn’t in my blood as a serious personal connection.

NT: What are you listening to right now?

HL: Let me look at my phone… At this moment, I am listening to the Rolling Stones’ It’s Only Rock ‘n Roll record. I’ve had it for years, but for some reason I can’t stop listening to it recently. It just sounds so wily and fun. Maybe its because David Bowie died recently, and I know he is on that.

I have also been listening to a lot of African music, like S. E. Rogie’s Palm Wine Guitar Music. He’s got this really simple melody. Listening to him makes me want to do a record just by myself, because that’s the way he did it.

Eddy Grant’s Walking On Sunshine, too. I like Eddy Grant. I always have since I was little. He sung “Electric Avenue,” and I always thought that was a cool song. Eddy Grant used to play all the instruments on his records, and he was doing that in the early ’80s. I find him inspirational.

NT: I Had a Dream That You Were Mine has references to soul, gospel, doo-wop and folk. In your ideal listening situation, whether people are sitting down to enjoy this album or dancing, what is the drink that they are drinking?

HL: Seltzer with cranberry juice. That’s what my daughters like.