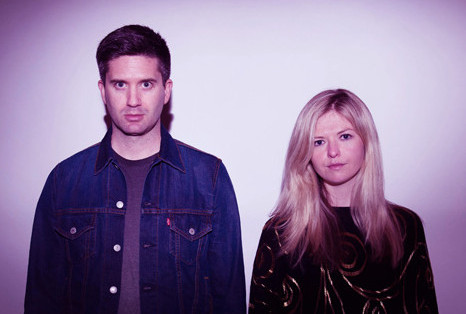 NT: Strange Pleasures seems to dip a bit more into the eighties than your last record. were you looking to make a bit more of a stylistic or dark pop album?

GH: No it was more like I was just writing and recording everyday and Tessa would come over and sing and we just followed our instincts. We didn’t really talk about it, it was more like, “this sounds cool, let’s work on that today”. Then about 8 months later we had these 12 songs. We just went for it.

NT: It sounds like your a bit of a perfectionist in the studio, are you able to calm down a bit once the album is completed?

GH: Perfection doesn’t really exist, I don’t know what a perfect song or melody would sound like. Vibe is the most critical thing in a song, sometimes that means keeping in mistakes. But maybe there are perfect little moments you can have in life. Sometimes I feel like I have those, they’re fleeting amazing little things.

NT: Did the you and Tessa really meet for the first time at a train stop, what spurred the conversation?

GH: Yes it’s actually true. If we had met some other way we would just say so, it’s okay for people to meet in mundane ways too.

NT: How much of the band’s music is still being inspired by European Cinema?

GH: I think once you’re inspired by something it doesn’t just end one day, it’s always part of you. As to cinema on this record I’m not really sure, I think it’s more like anything that’s ever influenced us makes an appearance.

NT: How much fun was making Berlin Lovers?

GH: It was fantastic. Lily and Arlo, the two young skaters, were really lovely and we had a great time. We both really love what Christian the director did with it. I called him with this idea of doing a roller skating video and it never occurred to me to ask whether he could roller skate. We popped out for lunch and came back and Christian was skating at 50 mph around Lily doing these amazing swooping shots, I couldn’t believe it. Then he quite causally dropped that he had been roller skating for ages. He did a few 360’s off the bench in the rink too.

NT: Why do you think that synth based music has become so popular again over the past few years?

GH: It probably harks back to the fact we were originally from an alien race who only communicated through synthesizers. Haven’t you seen Close Encounters?

NT: Which five albums continue to inspire you these days?

Yo La Tengo – I Can Hear the Heart Beating As One