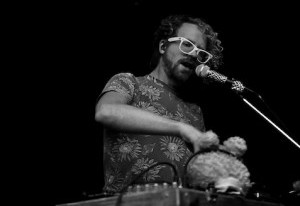 Cecil Frena AKA ‘Born Gold’ enlightens us on numerous subjects.

NT: You play an experimental brand of music, which is difficult to place in a specific genre. How would you describe to people what kind of music you play?

CF: I guess fundamentally it varies from song to song. I think that I would have to describe it as pop music. My real goal is to create pop music, to record it, and truly understand it. My background was always in punk and hardcore. I really have always loved pop, even back in the day, it’s what I wanted to record.

NT: How did you develop such a strong affinity to pop music?

CF: To be completely honest, I think most kids don’t really understand Minor Threat when they first hear it. Usually the first music you hear when you are young is pop. I was into hardcore, but fundamentally I really loved pop. I can say that I remember dancing to Micheal Jackson, and even Mr. Mister and really loving it. To this day, I still love looking into the past for great pop songs.

NT: Can you tell me a bit about the publicity shot with all the taxidermy?

CF: I shot that photo last year for Little Sleepwalker. I really am adverse to press photos. There is a house that’s a museum as well in Montreal that has all this taxidermy. What I wanted to do was frame myself with all the animals, like they were my friends. I wanted to make it kind of fun.

NT: This tour is noted for being a “house tour”, where many of the shows actually took place in people’s homes or art spaces. What were the logistics like, planning it all?

CF: It’s absolutely challenging, it’s not straightforward in the least bit. Every night is a new adventure. A regular tour is regimented. We have been pretty successful doing it. I booked the tour about three months prior. There’s many more variables putting on house shows. Sometimes they get canceled because people get a little nervous. I think on the whole they’ve been pretty good though. We try and do it through social media in a way that we can keep it under control.

NT: You have a quote on your blog by Jorge Luis Borges quoting Alfonso Reyes. He said, “One spent time published what he wrote in order to avoid spending his life correcting it, one publishes a book in order to to leave it behind and forget about it”. Is this kind of the way you approach your music?

CF: Yes, I think that’s the essence of the creative endeavour. There are plenty of people that want to be artists, but can’t. Borges was a genius, he had so much humility. I really feel like I want to make more music, and just be ok with it, to be open to criticism and just be able to handle it. I’m really grateful for the opportunity to make art.

NT: Do you ever miss the days of Gobble Gobble (Frena’s previous band)?

CF: Yes, those were really wonderful times. We had all quit our jobs, we saw ourselves kind of like evangelists, trying to convert people with our music. We were really young and lucky to have all those experiences, but I am totally with the music that I am making today. I’m really not that big on nostalgia, either.

NT: How important is audience participation at your shows? Does it get you down if people aren’t getting into it?

CF: Great question for me. Part of “Little Sleepwalker” was a reaction to body. We have a visually compelling live show. Audience participation is optional. I want the songs to be the main focus. I think people always end up dancing for the most part. Another important thing is that people feel comfortable and free. I want people to be themselves and have fun, that’s the most important thing.

NT: You wrote in your artist bio/OK Cupid profile that you wanted to “make something beautiful and turn it into cancer. What does this mean?

CF: When I was writing the record, I was living in isolation in Arizona in a retirement community. The isolation was a little painful at times. The Ok Cupid profile was created originally to attract someone that I might be attracted to. I actually really liked the profile that I had written, so I used it as a bio for the album. I was portraying a dead pan sense of humour that someone might appreciate.