Interview With Cadien From ‘Twin Peaks’

Northern Transmissions recently caught up with Twin Peaks frontman Cadien Lake James for a quick and humourous chat. Their new album Wild Onion is now out.

Northern Transmissions: Your age seems to come up quite often in interviews. Why do you think people make such a big deal of it? Stevie Wonder was playing at seven.

NT: Three of the band members met at Evergreen College and all quit to pursue a career in rock and roll. Any regrets so far?

CLJ: I regret moving out of state that has $25 eighths of weed.

NT: Sunken was mostly recorded by the band. In comparison, was it a luxury recording Wild Onion?

CLJ: We had Jimmy John’s for lunch everyday and were able to take our time and ask people to adjust volumes and change microphones, so yes!

NT: The Chicago music scene is proving to be prominent again. Other bands like The Orwells, Smith Westerns, and Yawn seem to be building quite a following. What’s going on out there?

CLJ: People are and have been making music and now there is social media so Chicago’s lack of industry no longer restricts its bands. There has always been a scene, or maybe it was magic gifted upon us by Billy Corgan (probably not).

NT: How did you develop your friendship with Chance The Rapper?

CLJ: We began by smoking blunts in the same rotation after school, and then we would beat box during cyphers, and then we were making jokes at lunch with our crew, “DOC Squad,” and then he started killing it and became famous and it is a pleasure to see him when the opportunity presents itself.

NT: You recently hosted a show on XMU for a couple of hours. How was it playing your favourite records for hundreds of thousands of listeners? BTW, Cadien Lake James is a great rock and roll name.

CLJ: To be honest, Clay sent me a playlist, and I pre-recorded goofy talking points on garage band at my house to insert between songs — isn’t the music industry such a horror?! Actually, it was an awesome opportunity and we’re so glad it could be on Justin’s show, Aquarium Drunkard, because he is such an awesome DJ and man. Thank you very much! I appreciate it, but Tween’s lead singer is named Bridget Battles…you can’t beat that!

NT: You recently played some shows a wheelchair. How did it go? What Happened?

While in New Orleans for my first time, I picked up Mario Cuomo, the mayor, on my back during our show, and I collapsed under his massive weight. While playing on a stool or in a wheelchair has been slightly frustrating for me because I have an innate drive to jump and roll around, it’s been nice to receive massive support about the endeavor from our fans in audiences and the press, so it’s been going pretty swell. I just got the cast off today and now I’m in a removable boot! Yay, showers! 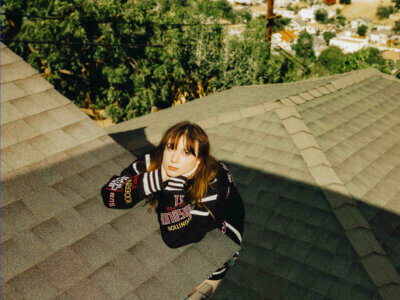